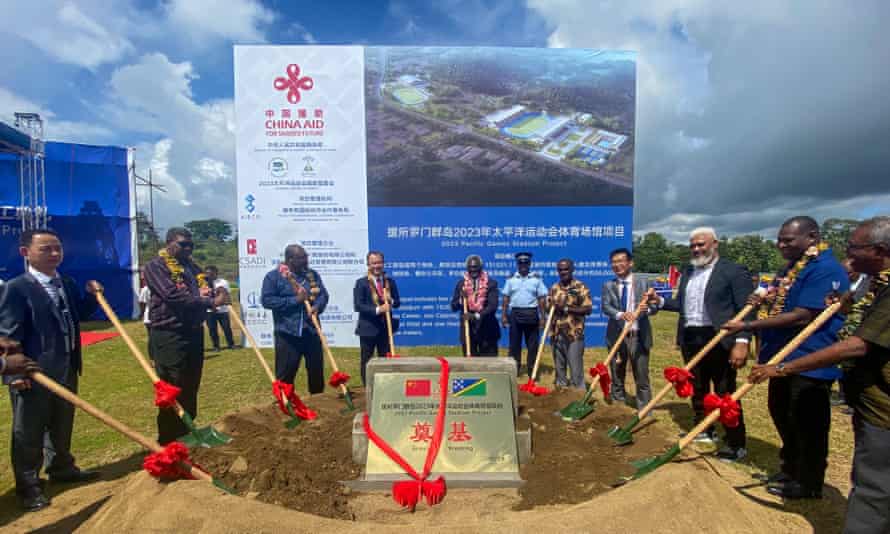 It was the week that everything changed. For years, security analysts and politicians have warned of the rise of China in the Pacific. Officials representing Beijing have been working slowly and, for the most part, quietly in the small island nations that dot the vast Pacific Ocean – cementing allies, funding infrastructure projects, conducting concerted person-to-person diplomacy.

But this week Beijing upped the tempo.

The leak of a sweeping economic and security pact revealed China is hoping to sign up 10 Pacific countries to a deal that could fundamentally alter the balance of power in a region that spans nearly one-third of the globe. Now Pacific nations are facing a choice that will shape the region for decades to come.

It began with the announcement that Chinese Foreign Minister Wang Yi would embark on an “extraordinary and unprecedented” trip around the Pacific from 26 May to 4 June, taking in eight countries in 10 days. Wang touched down in Solomon Islands on Thursday, before moving on to Kiribati and Samoa on Friday; Fiji, Vanuatu, Tonga, Papua New Guinea and Timor-Leste will follow next week.

Some of the countries Wang is visiting – like Kiribati – have been among the most difficult to visit throughout the pandemic, as Pacific island countries, fearful of the ravages of Covid on fragile healthcare systems, have brought in some of the strictest border closures in the world and are still closed to visitors.

“For them to be able to do this is quite a feat,” said Dr George Carter, a research fellow at the Department of Pacific Affairs at the Australian National University, saying the visit “has surpassed any other diplomacy, in terms of optics, in the last two years ”.

Jonathan Pryke, director of the Lowy Institute’s Pacific Islands program in Sydney, said the trip was an “extraordinary and unprecedented marathon that would leave a lot of people in the west nervous.” It’s not just what the trip signals for China’s post-Covid re-engagement with the region, but what kind of deals he will be signing with counterparts along the way ”.

Wang’s first stop was the Solomon Islands, which signed a controversial security deal with China last month, stoking the worst fears of Canberra and Washington, which have long been on the lookout for signs that China might establish a military base in the Pacific islands.

The China-Solomon Islands pact, which has not been made public, but a draft of which was leaked online, seems to allow for such a base, permitting China to “make ship visits to, carry out logistical replenishment in, and have stopover and transition in Solomon Islands ”, though Solomon Islands prime minister Manasseh Sogavare has denied any such base is on the cards.

“It’s the biggest concern of this deal for Australia,” James Batley, the former Australian high commissioner to the Solomon Islands, told the Guardian last month. “For Australia, it’s potentially a strategic nightmare, but it’s equally… of concern to other Pacific Islands as well for the same reason.”

But the Solomons-China deal was just the beginning. Shortly after news of Wang’s grand Pacific tour was announced, came the news of the proposed region-wide security deal.

The deal – proposed between China and 10 Pacific countries – covers everything from a free trade area with the region, to providing humanitarian and covid relief, to sending art troupes to the islands. But most concerning, is the vision it sets out of a much closer relationship on security matters, with China proposing it would be involved in training police, cybersecurity, sensitive marine mapping and gaining greater access to natural resources.

It would mean a significant shift in the regional security order, and places Pacific island countries firmly in the center of the geopolitical tug-of-war between China and the US and its allies.

“[China] has been slowly increasing its diplomatic, economic engagement in the Pacific, ”Carter said. “But now with Solomon Islands, it opened a door to another possibility in terms of engagement with China.” Once the door was open, said Carter, the move for China from economic and development partner to security player in the region happened “in a very fast and rapid manner”.

The proposed regional deal sent the west scrambling. Australia’s new foreign minister, less than a week into her job following the federal election last weekend, flew to Fiji to reaffirm Australia’s commitment to the Pacific.

“What we would urge, as Australia, is consideration of where a nation might wish to be in three or five or 10 years,” said Penny Wong when asked about China’s proposed deal.

New Zealand’s prime minister Jacinda Ardern, who is currently on a tour of the US, said: “We are very strongly of the view that we have within the Pacific means and the ability to respond to any security challenges that exist and New Zealand is willing. to do that. ”

In a move that was touted as significant, it was announced on Friday that Fiji would be joining Joe Biden’s Indo-Pacific Economic Framework (IPEF), the first Pacific island country to do so, as the US seeks to shore up alliances with Pacific nations. .

But the real question comes next week when Wang will host a meeting of his Pacific counterparts at a summit in Suva and urge them to sign the deal. Some Pacific leaders have signaled a willingness to consider Wang’s proposal, while one senior diplomat told the Guardian some leaders had “big concerns”.

Despite that “there has been a vacuum left in this region from traditional partners – they have to work extra hard to win back the hearts of Pacific people,” they said.

Experts believe some countries could certainly be swayed by the Chinese deal.

Dr Anna Powles, a senior lecturer in security studies at Massey University in New Zealand, said the deal would mean “a significant loss of strategic autonomy for Pacific countries and for that reason it is unlikely Beijing will be successful”.

That does not, however, preclude some Pacific states from pursuing bilateral versions of the arrangement. We will soon learn how effective Beijing’s diplomacy is in the Pacific. “