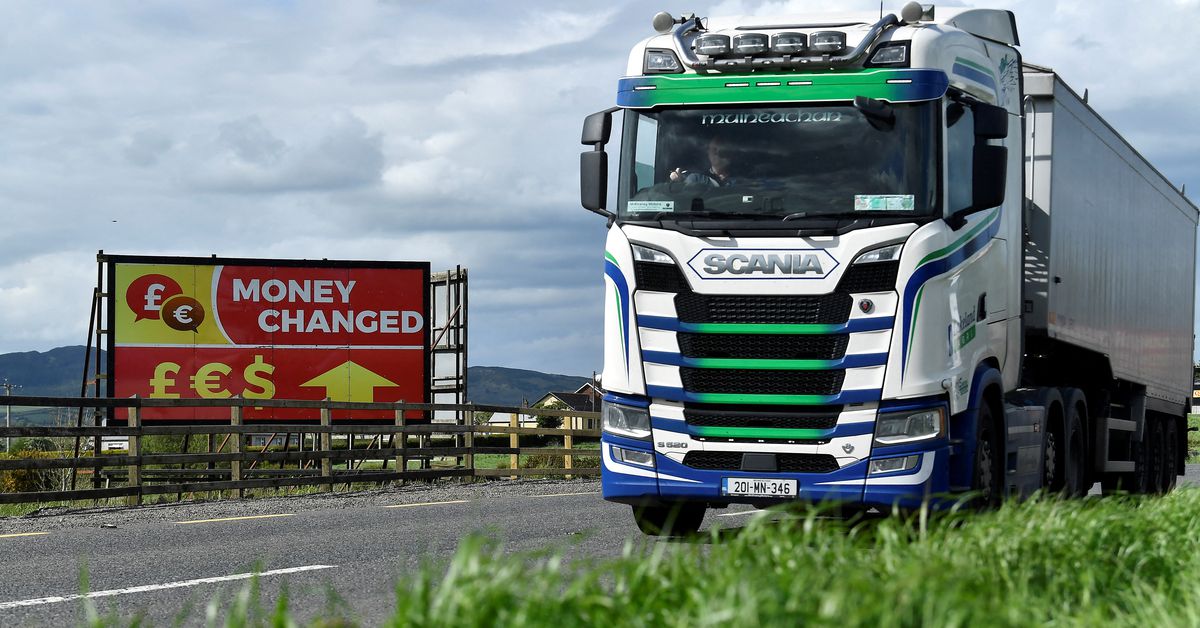 LONDON, June 13 (Reuters) – Britain will set out plans on Monday to override some of the post-Brexit trade rules for Northern Ireland, changes that will inflame tensions with the European Union but were dubbed mere “bureaucratic simplifications” by Prime Minister Boris Johnson.

Britain has been threatening for months to rip up the Northern Ireland protocol, an agreement for the British-run region struck by Johnson’s government in order to secure a Brexit divorce and wider trade deal between Brussels and London.

As part of the agreement, Northern Ireland effectively remained in the EU single market for goods to preserve an open border with EU-member Ireland that was key to a 1998 peace deal.

But that required customs checks on goods moving from Britain to Northern Ireland, which pro-British communities in Northern Ireland say erodes their place in the United Kingdom.

Johnson was keen to play down the impact of the new legislation, which his foreign minister, Liz Truss, will present to parliament later on Monday. He said any talk of a retaliatory trade war would be a “gross, gross overreaction”.

“It’s a bureaucratic change that needs to be made. Frankly it’s a relatively trivial set of adjustments,” Johnson told LBC radio, again challenging critics who say the legislation will break international law.

“All we are trying to do is have some bureaucratic simplifications between Great Britain and Northern Ireland.”

The legislation, like Brexit itself, has split legal and political opinion in Britain, with supporters of the UK’s divorce saying it does not go far enough and critics say it undermines London by challenging an international agreement.

Ireland warned that the plan would be “deeply damaging” and a “low point” in London’s approach to Brexit. Sefcovic said unilateral action would damage trust. read more

Tensions over the protocol have been simmering for months between London and Brussels, with British ministers accusing the EU of imposing rules that have snarled goods in red tape and threatened political stability in Northern Ireland.

Critics of London’s plan, including representatives of the province’s dairy, manufacturing and logistics industries, say its unilateral action will damage business.

Brussels believes any unilateral change may breach international law and it could respond with legal action and the imposition of tariffs – a risk at a time when British inflation is set to hit 10% and the economy is shrinking. read more

It is expected to propose a “green channel” for goods moving from Britain to Northern Ireland, scrapping rules that prevent the province from benefiting from tax assistance and ending the role of the European Court of Justice as sole arbiter.

The plan will be a test of Johnson’s authority after four in 10 of his lawmakers opposed him in a confidence vote last week.

It is also likely to spark alarm in Washington. US House of Representatives Speaker Nancy Pelosi has said there will be no US-UK trade deal if London scraps the protocol.