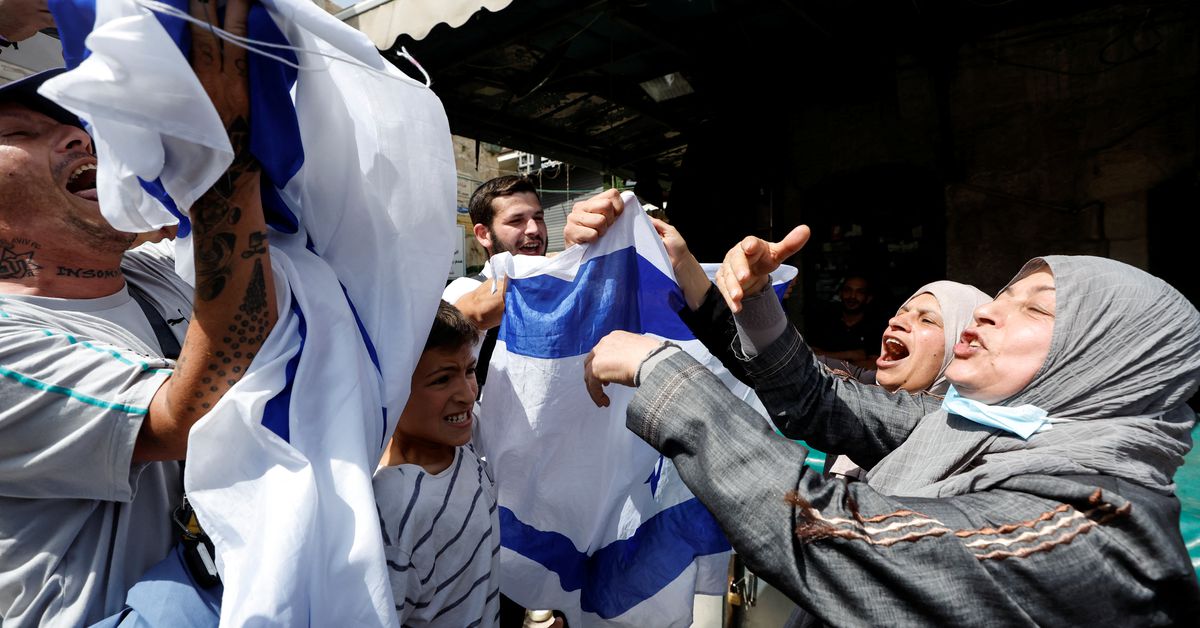 JERUSALEM, May 29 (Reuters) – Israeli police faced off with Palestinians holed up inside Jerusalem’s Al-Aqsa mosque on Sunday as hundreds of Jews visited the holy compound ahead of a contentious Jewish nationalist march through the Old City.

The annual Jerusalem procession celebrates Israel’s capture of the Old City in the 1967 Middle East war and draws thousands of cheering, chanting participants to its narrow, stone streets.

Palestinian factions have warned that the flag-waving parade through the city’s Muslim quarter could re-ignite their decades-old conflict with Israelis at a time of highly charged tensions. read more

Hours before the procession was due to kick off, police locked some Palestinians inside a mosque on the Al-Aqsa compound as Jewish visitors arrived for daily tours of the compound, which is revered by both Muslims and Jews.

Palestinians threw stones and shot fireworks at police, who responded with stun grenades.

Among the Jewish visitors were a dozen or so young men, wearing religious garb, who smiled, sang and clapped in the direction of the protesters. As the crowds grew, other Jews held up Israeli flags and sang the national anthem.

The Islamist group Hamas, which governs the Gaza Strip, condemned videos posted online suggesting that Jews had prayed at the site, in violation of a long-standing ban.

“The Israel government is fully responsible for all these irresponsible policies and the following consequences,” senior Hamas official Bassem Naim told Reuters.

In recent years Hamas has cast itself as a defender of Muslim Jerusalem. After weeks of confrontations last year over Palestinian evictions in the city, Hamas fired rockets into Israel during the march, triggering an 11-day war that killed at least 250 Palestinians in Gaza and 13 people in Israel.

Israelis and Palestinians argue in an alley in Jerusalem’s Old city May 29, 2022. REUTERS / Ammar Awad

Shrugging off calls for a rethink of the route from some of his coalition allies, Prime Minister Naftali Bennett confirmed on Sunday that the parade would go ahead as planned.

“Waving the Israeli flag in the capital of Israel is perfectly acceptable,” he said. “I ask the participants to celebrate in a responsible and dignified manner.”

Israel sees all of Jerusalem as its eternal and indivisible capital, while Palestinians want the eastern section as capital of their future state. Hamas, deemed a terrorist organization by Western governments, sees all of modern-day Israel as occupied.

Palestinians view Sunday’s march as an Israeli show of force and part of a broader campaign to bolster Jewish presence across the city. read more

Repeated clashes took place between Palestinians and Israeli police in the Al-Aqsa compound in April, during the holy month of Ramadan, with Muslims angered by the rising numbers of Jewish visitors to the mosque esplanade.

Two weeks ago, the funeral of Al Jazeera journalist Shireen Abu Akleh, killed during an Israeli army West Bank raid, descended into chaos when police charged the mourners and yanked away Palestinian flags.

Al-Aqsa is the third holiest site in Islam. It is also revered by Jews as the Temple Mount – a vestige of their faith’s two ancient temples.

Sunday’s procession is due to culminate at the Western Wall, a Jewish prayer site that sits below the Al-Aqsa mosques.