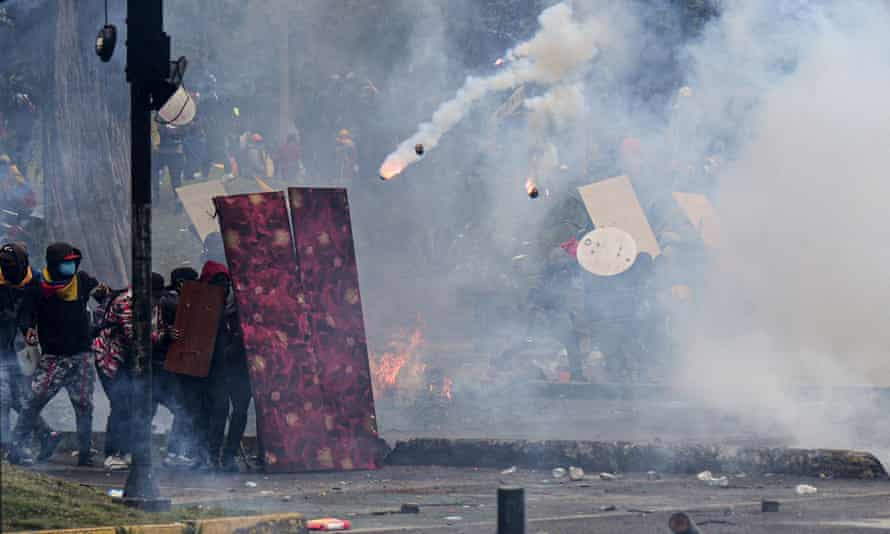 Ecuador has been brought to a near standstill after two weeks of tumultuous protests over a spike in fuel and food prices as global inflation inflames discontent over widening inequality across Latin America.

Ecuador’s powerful Indigenous federation Conaie began the protests a fortnight ago setting out 10 demands amid the spiralling cost of living. Among them are a freeze on fuel prices, a moratorium on bank debts, subsidies for fertilizer and no mining in Indigenous territories.

“We have told the president that we will not go to another dialogue to be mocked and mistreated,” Iza said by phone from Ecuador on Friday.

“[The government] has painted the Indigenous movement as the enemy within, ”he said. “Instead of dialogue we have demanded that [Lasso] responds publicly to the list of demands. ”

Clashes broke out in Quito on Thursday night even as the government ceded control of a cultural center, La Casa de la Cultura, to the Indigenous and peasant farmer protesters who had converged from the Andes and Amazon. It is the same auditorium that the movement occupied in October 2019 when nationwide protests over the slashing of fuel subsidies riled the country.

On Friday, Lasso declared in a televised address that: “Mr Iza’s real intention is to overthrow the government,” adding that the Indigenous leader “can no longer control the situation. The violence perpetrated by infiltrated criminals has gotten out of hand ”.

Iza responded that Lasso was trying to turn the protests “into a political issue” because he had failed to solve the problems. A state of emergency remained in place across six provinces, including the capital Quito.

Amid signs of escalating violence, Erika Guevara Rosas, the Americas director for Amnesty International, said its investigations showed that the death of a protester last Tuesday “was caused by security force agents, most likely police officers, through the use of excessive force”.

The government’s austerity measures – which include tax hikes and slashing fuel subsidies, part of a $ 6.5bn deal with the International Monetary Fund – have been worsened by the economic fallout of the Covid-19 pandemic and the spiralling costs of fuel, cooking oil, bread and fertilizer, driven by global inflation.

Sonia Guamangate, an Indigenous woman from Samanga in the volcanic Cotopaxi region, left two children at home to join tens of thousands of protesters who marched to the capital from the countryside.

“The prices have risen in the city but what we get paid for our agricultural products remain the same,” she complained.

“They call us ignorant Indians. We are not ignorant; We supply the food for the city. “

City dwellers also took to the streets of Quito over the rising cost of living. Mechanical engineer Miguel Terán, who could not get to work due to roadblocks and strikes by bus and taxi drivers, joined the marchers.

“There is a clamor among the people, especially those who don’t have a job,” he said. Unemployment rocketed in the pandemic and recovery has been slow with just 33.2% of Ecuadoreans with formal employment and 22.1% underemployed, according to Ecuador’s statistics institute.

“It’s very difficult to live when all the prices have risen so much. The fuel prices have gone up, so all the basic products have gone up, ”said Terán, adding also that people were angry at the meagre investment in health and education.

Estefany Gonzalez, a Venezuelan nurse who works as a carer in Quito, was giving away red and white balloons amid the protests last week with the word “paz”, or peace, written on them.

“I came out on the street to give away a bit of love,” said the migrant who has struggled to reach her 97-year-old charge due to the turmoil.

“Without transport, we can’t get to work and without work, we don’t eat,” she said. “The wages haven’t increased but the food basket costs twice as much.”

A year into his mandate, Lasso, a right-leaning, pro-business former banker, has been beset by woes from a stalled government agenda, economic stagnation and an unprecedented rise in violent crime – with twice as many murders in 2021 as the year before – and a series of brutal prison massacres.

“It is a very weak government which has made a lot of blunders. It doesn’t enjoy popular support, ”said Maria-Paz Jervis, dean of the Faculty of Social Sciences and Law at Quito’s SEK International University. She added that the “poor have got poorer and the middle-class has shrunk” after belt-tightening in the public sector due to the low price of oil, the country’s principal export.

Iza said that while the business elite had received government bailouts after the pandemic, “for the poorest there is absolutely nothing”.

“The crisis should be borne by all Ecuadorians, not only by the poor,” he said.