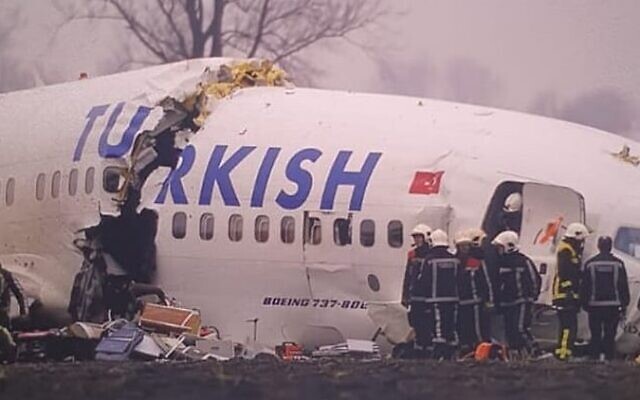 A flight to Turkey from Ben Gurion Airport returned to the terminal from the runway on Tuesday after several passengers found photos of plane crashes had been sent to their cellphones.

The incident occurred as the plane was taxiing for takeoff, according to a statement issued by the Israel Airports Authority (IAA).

Later on Tuesday, the IAA said several passengers had been involved in sending out the photos. Police later said nine passengers were arrested.

They were removed from the flight, the IAA statement noted, adding that the plane was cleared for takeoff after undergoing an extensive security check. The flight took off after a delay and reached its destination safely.

The IAA statement did not specify how many people received the photos or whether they were using the same cellular network or brand of phone. Some reports suggested the photos were disseminated via Apple’s AirDrop service, which enables file-sharing on devices in close proximity.

According to police, nine Israelis from a village in northern Israel were detained and taken in for questioning on suspicion of sending the photos, “which could be interpreted as constituting a threat to carry out an attack.”

All suspects were around the age of 18, read the police statement.

They are suspected of spreading false information that caused fear and panic among the public, police said.

A photo of Turkish Airlines Flight 1951, a passenger flight that crashed during landing at Amsterdam Schiphol Airport, the Netherlands, on 25 February 2009 – one of several plane crash photos sent to passengers on a flight from Israel to Turkey that was delayed on May 10 , 2022 (Israel Airports Authority)

According to the Ynet news site, the flight was operated by AnadoluJet, a subsidiary of Turkish Airlines.

The report said the Boeing 737 was carrying 160 passengers.

A photo sent to passengers on a flight from Israel to Turkey that was temporarily grounded on May 10, 2022 (Israel Airports Authority)

The flight was initially delayed while the circumstances surrounding the incident were investigated, the IAA said, praising the captain for deciding to return to the terminal instead of continuing with the flight as planned.

All passengers were required to leave the plane at the terminal for further checks and security crews reinspected all luggage, before the plane was cleared for takeoff.