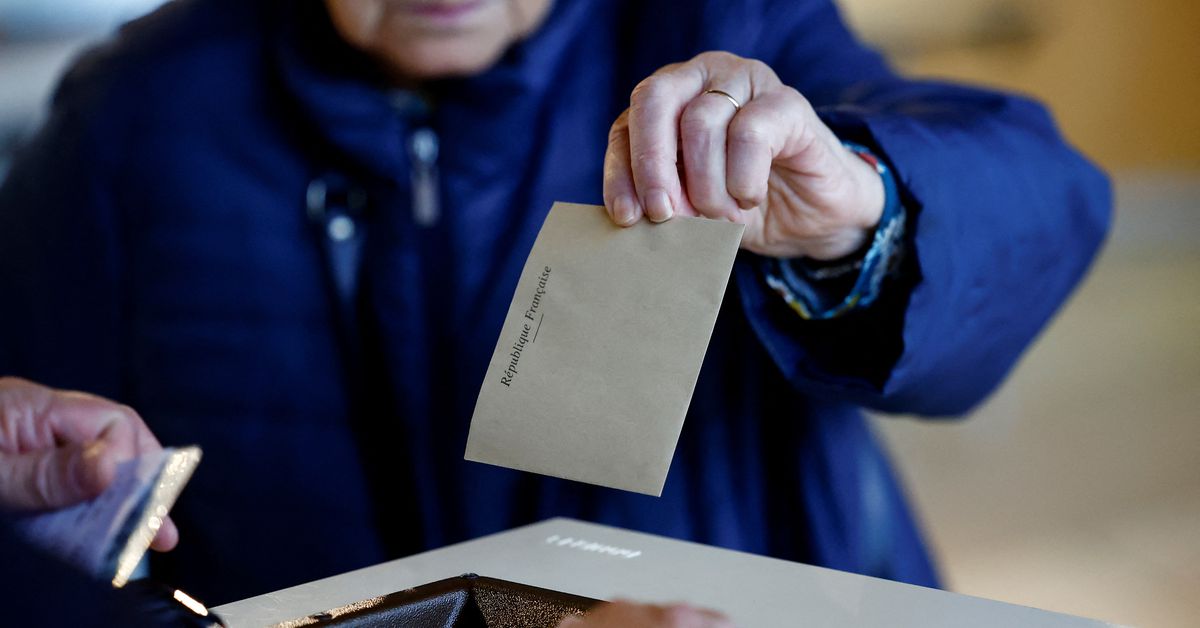 PARIS, June 19 (Reuters) – Voting was underway in France on Sunday in a parliamentary election that could deprive newly re-elected centrist President Emmanuel Macron of the absolute majority he needs to govern with a free hand.

Initial projections were expected at 8 pm (1800 GMT) from the election that could change the face of French politics.

Macron won a second term in presidential elections in April. If Sunday’s vote does not give his camp an outright majority it would open a period of uncertainty that could be resolved by a degree of power-sharing among parties unheard of in France over the past decades – or result in political paralysis and repeat parliamentary elections down. the line. read more

Pollsters predict Macron’s camp will end up with the biggest number of seats, but say it is in no way guaranteed to reach the 289 threshold for an absolute majority.

Opinion polls also see the far right likely to score its biggest parliamentary success in decades, while a broad left-green alliance could become the largest opposition group and the conservatives find themselves as kingmakers.

In the town of Sevres just outside Paris, where light rain provided some relief after a major heatwave hit France on Saturday, some voters said they were motivated by environmental concerns to cast a ballot for the Nupes left-wing alliance.

“During the past 5 years, the presidential majority wasn’t able to meet the challenges of climate change – the current heatwave makes you want to support environmental projects even more,” Leonard Doco, a 21-year-old film student, told Reuters. .

Others said they didn’t trust the leader of the left-wing bloc, firebrand Jean-Luc Melenchon, who has campaigned under the slogan “Elect me prime minister” and who promises to cut the retirement age to 60 from 62, freeze prices and ban companies from firing workers if they pay dividends.

“Melenchon is a hypocrite. He makes promises that don’t hold up. Retirement at age 60, that’s impossible,” said Brigitte Desrez, 83, a retired dance teacher who voted for Macron’s party.

A voter casts their ballot in the second round of the French parliamentary elections at a polling station in Vire-Normandie, France, June 19, 2022. REUTERS / Stephane Mahe

Overnight, results of France’s overseas departments brought bad news for Macron, with his minister for maritime affairs losing in her Caribbean constituency. Some 15 government ministers are running in this election and Macron has said they’ll have to quit if they lose.

Macron is seeking to raise the retirement age and pursue his pro-business agenda and further European Union integration.

After electing a president, French voters have traditionally used legislative polls that follow a few weeks later to hand him a comfortable parliamentary majority – with Francois Mitterrand in 1988 a rare exception.

Macron and his allies could still achieve that.

But the rejuvenated left is putting up a tough challenge, as inflation puts the cost of living concerns at the forefront of many voters’ minds.

If Macron and his allies miss an absolute majority by just a few seats, they may be tempted to poach MPs from the center-right or conservatives, officials in those parties said.

If they miss it by a wider margin, they could either seek an alliance with the conservatives or run a minority government that will have to negotiate laws with other parties on a case-by-case basis.

Even if Macron’s camp does win an absolute majority, it is likely to be thanks to his former prime minister, Edouard Philippe, who will be demanding more of a say on what the government does.

However Sunday’s vote goes, the president is likely entering a new period of having to strike more compromises, after five years of undisputed control since his first election in 2017.