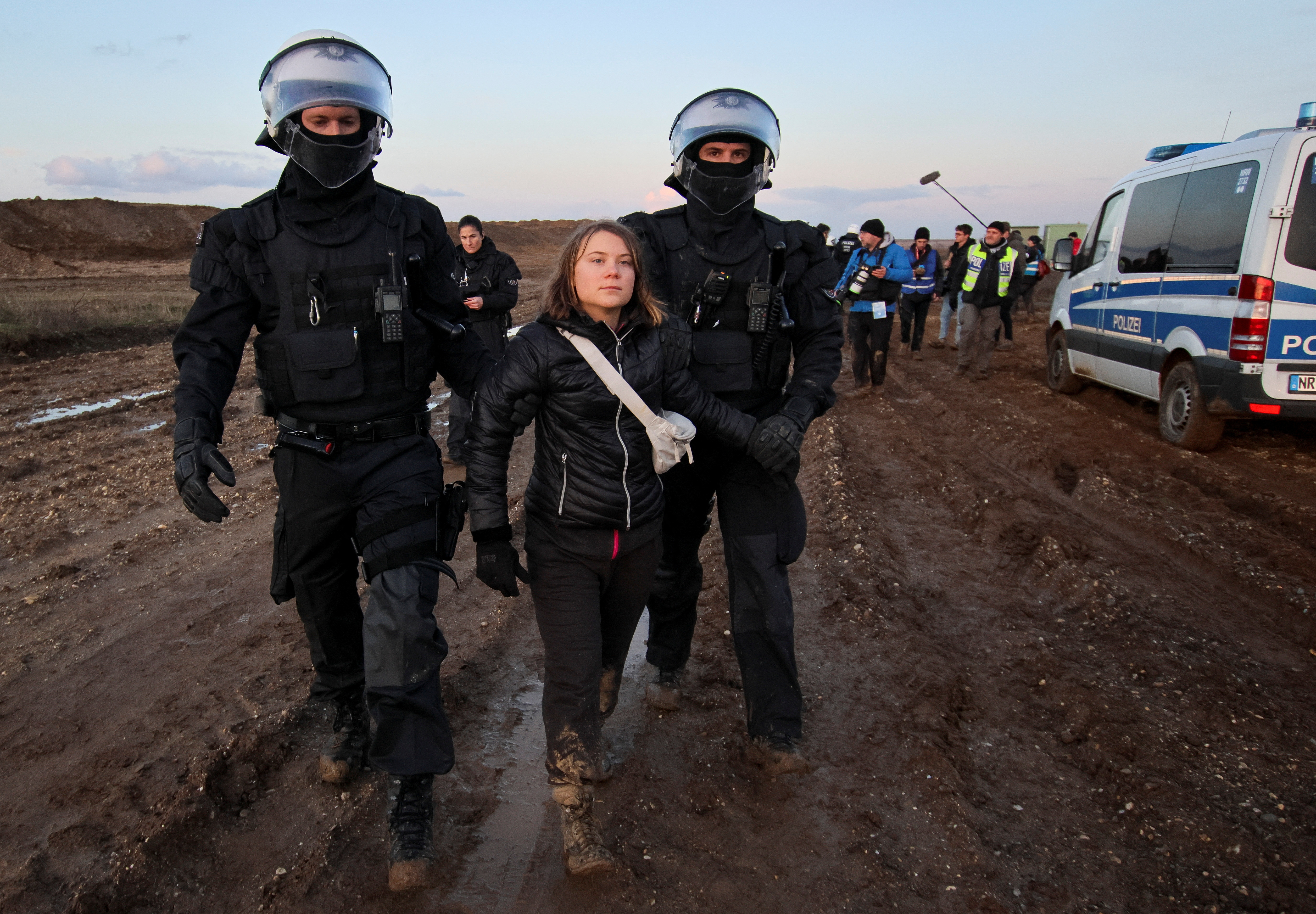 LUETZERATH, Germany, Jan 17 (Reuters) – Climate campaigner Greta Thunberg was detained alongside other activists on Tuesday during protests against the demolition of the coal village of Luetzerath, but the entire group will be released later in the day, according to police.

“There is no reason to hold them for days. It might take hours or they will go immediately,” a spokesperson for regional police in Aachen said, speaking about the entire group of demonstrators.

Thunberg was held while protesting at the opencast coal mine of Garzweiler 2, some 9 km (5.6 miles) from Luetzerath, where she sat with a group of protesters near the edge of the mine.

The clearing of the village in the western state of North Rhine-Westphalia was agreed between RWE and the government in a deal that allowed the energy giant to demolish Lutzerath in exchange for its faster exit from coal and saving five villages originally slated for destruction.

Activists have said Germany should not be mining any more lignite and should focus on expanding renewable energy instead.

Riot police backed by bulldozers removed activists from buildings in the village with only a few left in trees and an underground tunnel by last weekend, but protesters including Thunberg remained at the site staging a sit-in into Tuesday.

[1/5] Police officers detain climate activist Greta Thunberg on the day of a protest against the expansion of the Garzweiler open-cast lignite mine of Germany’s utility RWE to Luetzerath, in Germany, January 17, 2023 that has highlighted tensions over Germany’s climate policy during an energy crisis. . REUTERS/Wolfgang Rattay

Thunberg, was seen sitting alone in a large police bus after being detained, a Reuters witness said.

“We are going to use force to bring you to the identity check, so please cooperate,” a policeman said to the group, according to Reuters footage.

“Greta Thunberg was part of a group of activists who rushed towards the ledge. However, she was then stopped and carried by us with this group out of the immediate danger area to establish their identity,” a spokesperson for Aachen police told Reuters, adding one activist had jumped into the mine.

Thunberg was carried away by three policemen and held by one arm at a spot further away from the edge of the mine where she was previously sat with the group.

She was then escorted back towards police vans.

The Swedish climate activist addressed the around 6,000 protesters who marched towards Lutzerath on Saturday, calling the expansion of the mine a “betrayal of present and future generations.”

“Germany is one of the biggest polluters in the world and needs to be held accountable,” she said.