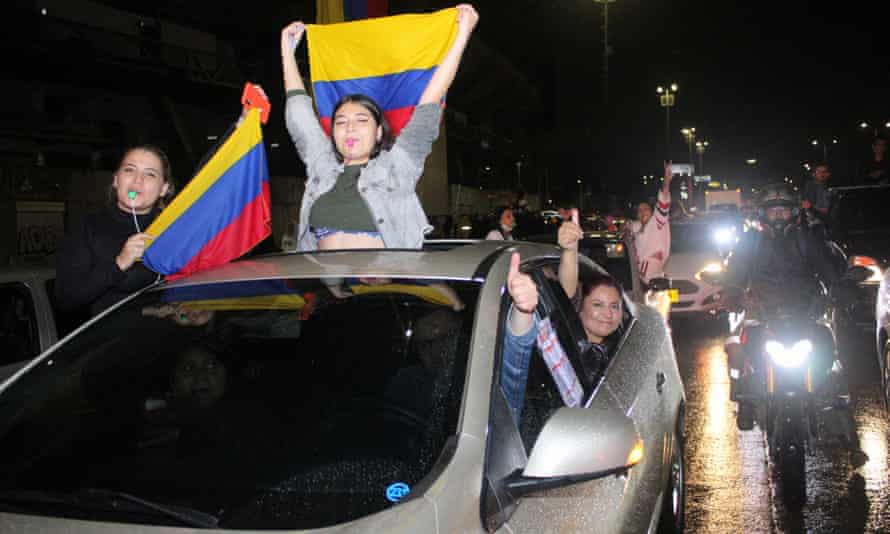 H.e spent 12 years of his youth in the ranks of an urban guerrilla group, taking the alias of a revolutionary general from Gabriel García Márquez’s One Hundred Years of Solitude. Later, he would serve as a progressive mayor of Bogotá, Colombia’s capital, and as a senator. He ran for president unsuccessfully twice, unable to overcome the conservative wall erected nearly two centuries ago around the Colombian presidency.

But on Sunday, Gustavo Petro, 62, was finally able to topple that wall and was elected president, making history as the first leftwing head of state of the South American country.

“We are not going to betray the electorate that has shouted at history,” said Petro in a triumphant victory speech in Bogotá on Sunday night to rapturous applause. “It is that starting today Colombia changes.”

Petro’s journey from the ranks of the M-19 guerrilla movement to the presidential palace in Bogotá also included an arrest for possession of weapons when he was younger. He also said he survived torture. The M-19 demobilized in 1990, with some of its members signing Colombia’s current constitution. Other members were killed, including Carlos Pizarro, its presidential candidate, that year.

Petro’s victory over Rodolfo Hernández, a business mogul and gaffe-prone former mayor of Bucaramanga who once referred to Hitler as a “great German thinker”, was met with partying in the streets from supporters across the country. He will take office in early August.

“Petro has a totally different vision because he has focused his attention on the most unprotected people in the country,” said Andres Felipe Barrero, who voted for Petro on Sunday night. “And that includes the people who live in the marginal neighborhoods of the big cities of Colombia, as well as black and Indigenous communities.”

As mayor of Bogotá he accrued a reputation for high-handedness and a pugnacious attitude towards his critics, while also implementing a harm reduction program for the city’s homeless, as well as attempting to reform rubbish management.

Despite the euphoria of Sunday night, Petro’s time in office is likely to be extremely challenging. Not only does his 50.47% vote share give him a thin mandate, he is viewed with extreme suspicion by a significant part of the country, who equate him with rebel groups and leftist strongmen in the region.

“In a traditional conservative rightwing country, some Colombians fear how much can change with a leftwing government,” said Silvana Amaya, a senior analyst at the global risk consultancy Control Risks, ahead of the vote on Sunday. “Some Colombians like the left to Chavez and the socioeconomic misfortune in Venezuela. Others consider that a country that has lived through an internal conflict for more than 60 years led by leftist guerrilla groups should not allow such an ideology to rule Colombia. “

His plans to retool Colombia’s economy away from fossil fuels and towards agriculture are likely to spook markets.

Despite the trepidation about a Petro victory, polling day went ahead without violence or allegations of fraud, surprising some in a country that has long had a reputation for political bloodletting.

“Today, we celebrate Colombian democracy and their peaceful election,” tweeted Brian A Nichols, the US assistant secretary of state for western hemisphere affairs, on Sunday. “We look forward to working closely with the Petro administration to promote mutual goals for the Colombian and American people.”

Also high on Petro’s agenda will be the country’s fragile peace process with the leftist rebels of the Revolutionary Armed Forces of Colombia (Farc), which was signed in 2016 and formally ended five decades of civil war that killed more than 260,000 people and displaced more than 7 million.

That deal has been falteringly implemented by the outgoing government of President Iván Duque, who has been accused of deliberately slow-walking its rollout. Dissident Farc facts that did not demobilise and other rebel groups such as the National Liberation Army (ELN) continue to roil the countryside and profit from drug-trafficking and racketeering operations.

“The candidate who promised the most, and in the most detail, to implement the 2016 peace accord was elected,” said Adam Isacson, director of defense oversight at the Washington Office on Latin America, a US-based thinktank. A key element of Petro’s plan is to increase governance and basic services in the neglected countryside where armed groups and coca continue to thrive, and that’s a core commitment of the peace accord. Much of his electoral base is in these historically conflicting areas, which voted for him overwhelmingly. “