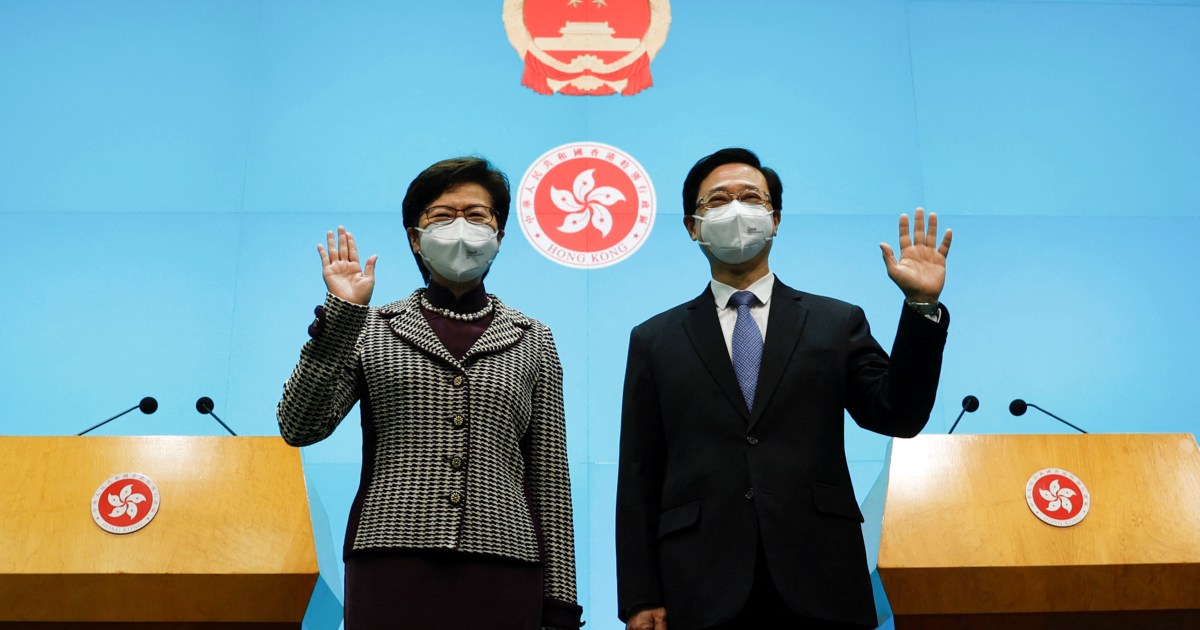 Former security chief John Lee is due to take office on July 1, the 25th anniversary of Hong Kong’s return to Chinese rule.

Hong Kong’s next leader John Lee is visiting Beijing, where he is expected to get the central government’s official nod before he officially takes office in a month.

Lee, 64, a former police officer and security chief who oversaw the crackdown on Hong Kong’s democracy movement, was chosen as the next chief executive by a select group of Beijing loyalists earlier this month.

He was the sole candidate in the race and got 99 percent of the vote, after China changed Hong Kong’s electoral system to exclude anyone deemed “unpatriotic”.

As part of a four-day trip, which began on Saturday, Lee is expected to receive his official letter of appointment from Chinese Premier Li Keqiang and meet top Chinese leaders, local media said.

The South China Morning Post earlier reported that Lee will meet President Xi Jinping, and will present a list of his team for approval. Citing unnamed sources, the paper said Financial Secretary Paul Chan and Secretary for Justice Teresa Cheng were “highly likely” to stay on as senior officials.

The incoming chief executive will have to undergo testing and quarantine over the weekend, and will not be able to meet outsiders during his trip, the report said.

Lee will assume office on July 1, which coincides with the 25th anniversary of Hong Kong’s transfer from British to Chinese rule and the halfway point of the so-called “one country, two systems” framework which was supposed to be safeguard Hong Kong’s freedoms and way. of life for at least 50 years.

It is not yet confirmed whether Xi will visit Hong Kong for the celebrations.

Such a trip would mark the first time Xi has traveled outside the Chinese mainland since the pandemic began.

In July 2017, Xi attended the swearing-in of Hong Kong leader Carrie Lam as part of a three-day trip, which also included a visit to the local Chinese army barracks.

But the protests that accompanied that trip are unlikely to be repeated this year, because a Beijing-imposed national security law has effectively stifled any criticism or dissent.

More than 10,000 police officers will be deployed at the event a Chinese leader does visit Hong Kong, local publication Eastweek magazine reported.

Local authorities are also finding ways to protect Xi against the risk of coronavirus infection, as both Hong Kong and China remain committed to a zero-COVID strategy.

Xi may opt for a day trip or scrap the visit entirely if new coronavirus outbreaks emerge, according to the Wall Street Journal.