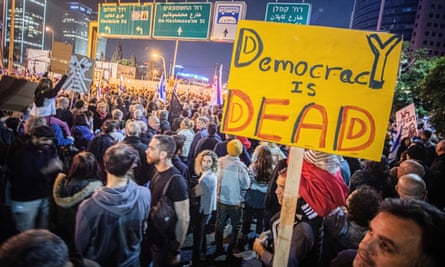 An estimated 100,000 people took to the streets of Tel Aviv on Saturday night in what protesters described as a “fight for Israel’s destiny” over sweeping judicial changes proposed by the new far-right government.

Israel’s longtime prime minister, Benjamin Netanyahu, returned to office last month at the helm of a coalition of conservative and religious parties that make up the most right-wing government in the country’s history.

The new administration has accused Israel’s supreme court of leftwing bias and overstepping its authority, and is seeking to curb the court’s powers by giving the Knesset more control over judicial appointments and severely restricting its ability to overturn laws and government decisions.

The Tel Aviv protest, along with smaller demonstrations in Jerusalem, Haifa and Beersheba, were sparked by fears that the far-reaching proposals undermine democratic norms. Since Israel has no formal constitution, the supreme court plays an important role in keeping government ministers in check.

Netanyahu – himself on trial on corruption charges, which he denies – has defended the plans. His opponents say the proposed changes could help the prime minister evade a conviction or even see the case dropped altogether.

Israeli opposition leader and former prime minister, Yair Lapid, as well as several other figures from across the country’s political spectrum, addressed demonstrators in central Tel Aviv on Saturday as the crowd waved the blue and white national flag and held placards reading “No to dictatorship.” ”.

“We have here in the streets representatives of many groups who don’t usually come out to protest, but they are here, even sworn rightwingers,” said one speaker, the celebrated novelist David Grossman.

“This immensely diverse group is prepared to put aside its differences, and fight this existential fight… In its 75th year, Israel is in a fateful struggle for its character, for its democracy and for the status of its rule of law.”

Noya Matalon, 24, a law student at Tel Aviv University, said: “The last big protest movement in Israel was about taking Netanyahu down, but it’s not a matter of right and left any more. Everyone – Arabs, Jews, even people who agree we need some reforms to the judicial system – everyone is saying they are scared.”

The musician Ollie Danon, 23, canceled a show scheduled for Saturday night so he and audience members could join the protests instead. “There’s a crisis in engagement in politics here after five elections in a short space of time. There was a sense it was just all about Bibi,” he said, using Netanyahu’s nickname.

“This is bigger than Bibi now, though; it’s an emergency situation. I believe the supreme court does need reform. Its rulings usually support the occupation [of the Palestinian territories], and somehow now it’s the left wing who are out protesting to defend it. It’s all absurd.”

Saturday’s gatherings build on similar demonstrations over recent weeks, including one in Tel Aviv last weekend that drew 80,000 people, nationwide protests by students, and one outside a Tel Aviv court. Roee Neuman, one of the organizers, said more street protests are planned, as well as strike action.

“I am optimistic things can change, even if I am not optimistic about the state of Israel at the moment. We are going to increase our efforts: we are coordinating strikes in sectors that would never normally get involved, like lawyers, doctors and the tech industry. We can block roads.

“It’s difficult to predict what will happen, but I think if it starts hitting the economy they will have to listen.”

In addition to the growing protest movement, the prime minister has faced pressure from Israel’s attorney general after a ruling last week that disqualified key ally Aryeh Deri from holding a government post because of a conviction of tax offenses.

Netanyahu was forced to fire the Shas party leader during Sunday’s cabinet meeting, declaring as he did so that “the high court decision ignores the will of the nation”.

The coalition also faced an early test on Friday in the form of a disagreement between cabinet members over dismantling a new Jewish settlement in the occupied West Bank.