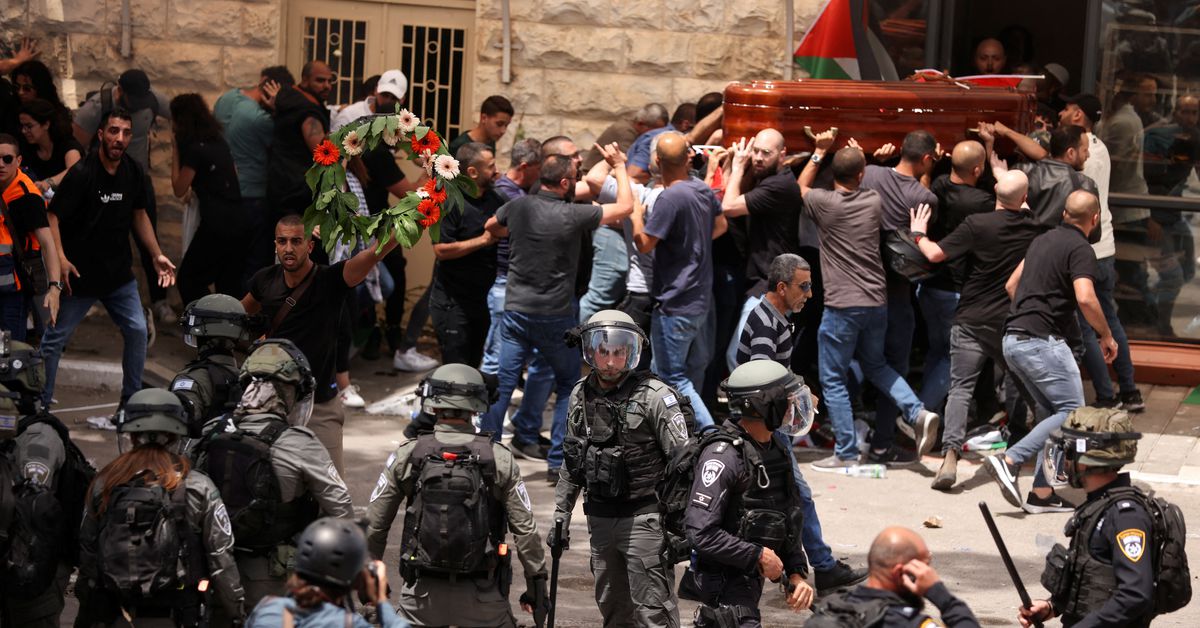 JERUSALEM, May 13 (Reuters) – Israeli police officers charged at Palestinian mourners carrying the coffin of Al Jazeera journalist Shireen Abu Akleh on Friday, before thousands led her casket through Jerusalem’s Old City in an outpouring of grief and anger over her killing.

Packed around Abu Akleh’s coffin, dozens of Palestinians, some waving Palestinian flags and chanting, “with our soul and blood we will redeem you Shireen,” began walking toward the gates of St. Joseph’s Hospital.

Israeli police officers, in an apparent bid to stop them proceeding by foot rather than taking the coffin by car, burst through the courtyard gates and charged at the crowd, some beating pallbearers with batons and kicking them.

At one point the group carrying her coffin backed against a wall and almost dropped the casket, recovering it just before one end hit the ground as stun grenades detonated.

The violent scenes, which lasted only minutes, added to Palestinian outrage over Abu Akleh’s killing, which has threatened to fuel violence that has surged since March.

Abu Akleh, who had covered Palestinian affairs and the Middle East for more than two decades, was shot while reporting on an Israeli raid in the occupied West Bank on Wednesday. read more

Palestinian authorities have described Abu Akleh’s killing as an assassination by Israeli forces. Israel’s government initially suggested Palestinian fire might have been to blame, but officials also said they could not rule out it was Israeli gunfire that killed her.

Israeli police said a group of Palestinians outside the hospital, whom they described as rioters, had begun throwing stones at officers.

“The policemen were forced to act,” they added.

The White House found the images disturbing, press secretary Jen Psaki told reporters, and US officials will remain in close contact with Israeli and Palestinian authorities in the aftermath of Akleh’s funeral.

“Every family deserves to be able to lay their loved ones to rest in a dignified and unimpeded manner,” said US Secretary of State Antony Blinken.

A few minutes after police intervened, Abu Akleh’s coffin was placed in a vehicle that headed toward the Cathedral of the Annunciation of the Virgin in Jerusalem’s Walled Old City, where the funeral procession proceeded peacefully.

Crowds of Palestinians lined the narrow alleyways of the Old City as the coffin was carried to the Mount Zion Cemetery nearby.

Her grave was covered in wreaths and the Palestinian flag draped over the grave cross as mourners surrounded it solemnly, paying tribute to Abu Akleh.

“We’re here because we are screaming for justice. Justice for Shireen Abu Akleh and justice for Palestine,” said one mourner, who did not want to be identified by name.

The Israeli military said on Friday that its initial investigation “concluded that it is not possible to unequivocally determine the source of the gunfire which hit and killed Ms. Abu Akleh.”

She may have been killed by shots fired by Palestinian militants shooting at Israeli military vehicles or been hit inadvertently by an Israeli soldier returning fire, it said.

The Palestinian Attorney General’s office issued a statement on Friday in which it said initial investigations have found that the sole source of gunfire in the area where Abu Akleh was hurt was Israeli.

In a statement, agreed by consensus on Friday, the 15-member UN Security Council strongly condemned the killing and called for an “immediate, thorough, transparent, and fair and impartial investigation.”

Israeli forces on Friday resumed raids on the outskirts of Jenin, where Abu Akleh was killed, and the Palestinian Health Ministry said 13 Palestinians had been wounded.

The Palestinian Islamic Jihad group meanwhile claimed responsibility for the death of an Israeli police officer in an exchange of gunfire in Jenin.

A spokesman for Palestinian President Mahmoud Abbas, Nabil Abu Rudeineh, said events in Jerusalem and Jenin could push the sides into serious escalation.

At least two of her colleagues who were with her said that they had come under Israeli sniper fire and that they were not close to militants.

Israel, which has voiced regret at Abu Akleh’s death, has proposed a joint investigation with the Palestinians, asking them to provide the bullet for examination.

The Palestinians have rejected the Israeli request and have called for an international investigation.