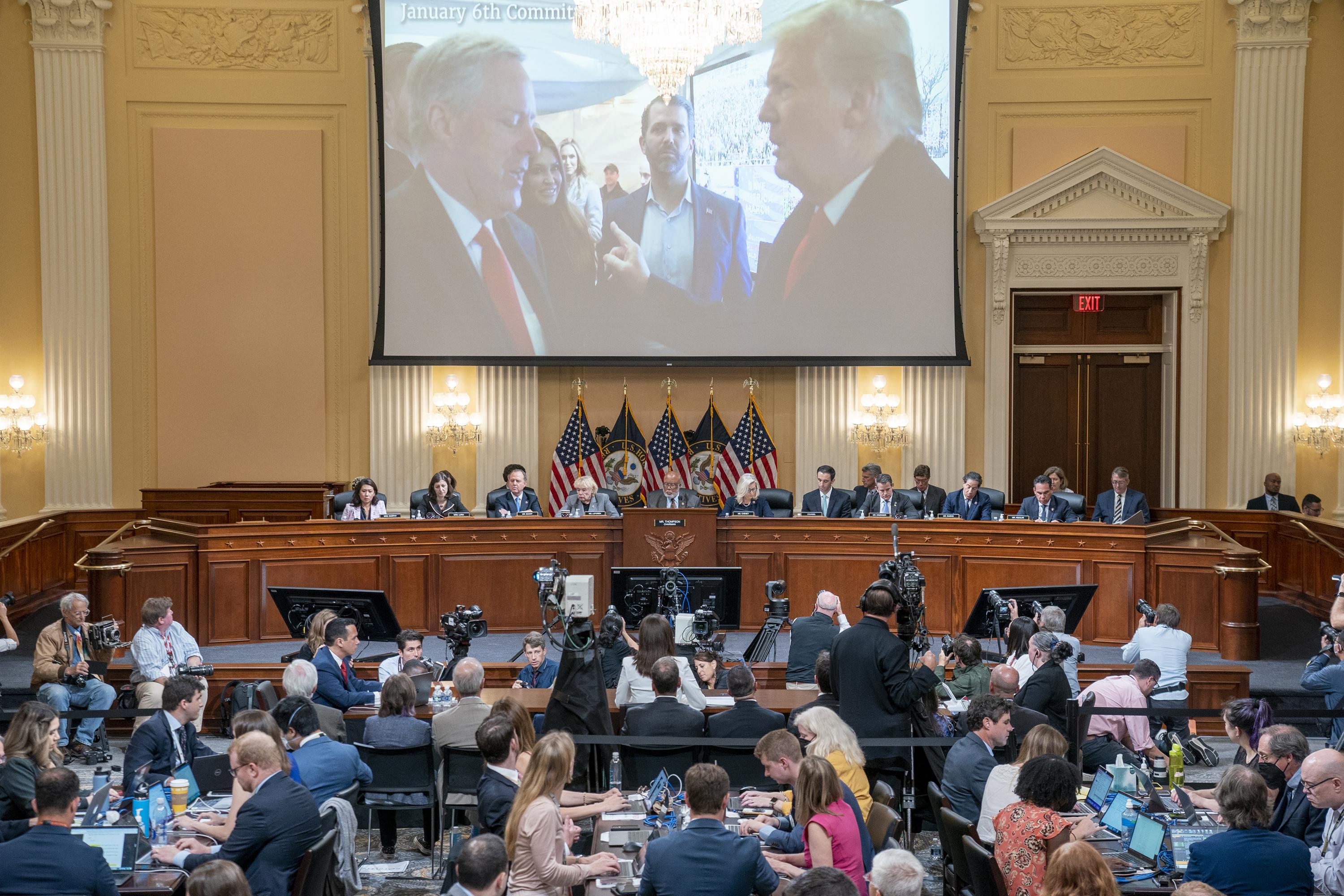 WASHINGTON (AP) – The Jan. 6 committee is set to highlight the way violent far-right extremists answered Donald Trump’s “siren call” to come to Washington for a big rally, as some now face rare sedition charges over the deadly US Capitol attack and effort to overturn the 2020 presidential election.

“We will lay out the body of evidence that we have that talks about how the president’s tweet on the wee hours of December 19th of ‘Be there, be wild,’ was a siren call to these folks,” said one panel member, Rep. . Stephanie Murphy, D-Fla., Over the weekend on “Meet the Press.” In fact, Trump tweeted, “Be there, will be wild!”

Among those expected to testify is Stephen Ayres, who pleaded guilty last month to disorderly and disruptive conduct in a restricted building. He admitted that on Jan. 2, 2021, he posted an image stating that Trump was “calling on us to come back to Washington on January 6th for a big protest.” Another witness is Jason Van Tatenhove, an ally of Oath Keepers leader Stewart Rhodes. The witnesses were confirmed by someone familiar with the testimony who spoke on condition of anonymity because the witnesses had not yet been announced.

This is the seventh hearing in a series that has presented numerous blockbuster revelations from the Jan. 6 committee. Over the past month, the panel has created a stark narrative of a defeated Trump “detached from reality,” clinging to his false claims of voter fraud and working feverishly to reverse his election defeat. It all culminated with the deadly attack on the Capitol, the committee said.

What the committee intends to probe Tuesday is whether the extremist groups, including the Proud Boys, Oath Keepers and QAnon adherents who had rallied for Trump before, coordinated with White House allies for Jan. 6. The Oath Keepers have denied there was any plan to storm the Capitol.

The panel is also expected to highlight new testimony from Pat CipolloneThe former White House counsel, who was “aware of every major move” Trump was making, said Rep. Jamie Raskin, D-Md., Who will lead the session.

It’s the only hearing set for this week, as new details emerge. An expected prime-time hearing Thursday has been shelved for now.

This week’s session comes after former White House aide Cassidy Hutchinson provided stunning accounts under oath of an angry Trump who knowingly sent armed supporters to the Capitol on Jan. 6 and then refused to quickly call them off as violence erupted, siding with the rioters as they searched menacingly for Vice President Mike Pence.

Trump has said Cassidy’s account is not true. But Cipollone at Friday’s private session did not contradict earlier testimony. Raskin said the panel planned to use “a lot” of Cipollone’s testimony.

The panel is expected to highlight a meeting on Dec. 18, 2020, at the White House in which former Trump lawyers Rudy Giuliani and Sidney Powell, one-time Trump national security adviser Michael Flynn and others floated ideas for overturning the election results, Raskin told CBS over the weekend..

This was days after the Electoral College had met on Dec. 14 to certify the results for Biden – a time when other key Republicans were announcing that the election and its challenges were over.

On Dec. 19, Trump would send the tweet beckoning supporters to Washington for the Jan. 6 rally, the day Congress was set to certify the Electoral College count: “Big protest in DC on January 6th. Be there, will be wild! ”

The Proud Boys and the Oath Keepers, extremist far-right groups whose leaders and others are now facing rare sedition charges for their roles in the attack, prepared to come to Washington, according to court filings.

On Dec. 29, the Proud Boys chairman posted a message on social media that said members planned to “turn out in record numbers on Jan. 6th, ”according to a federal indictment.

The group planned to meet at the Washington Monument, its members instructed not to wear its traditional black and yellow colors, but be “incognito.”

The Proud Boys have contended that membership grew after Trump, during his first debate with Biden, refusing to outright condemn the group but instead told them to “stand back and stand by.”

The night before Jan. 6, Proud Boys leader Enrique Tarrio met with Rhodes at an underground parking garage, according to court filings along with images a documentary filmmaker trailing the group provided to the panel.

The Oath Keepers had also been organizing for Jan. 6 and established a “quick response force” at a nearby hotel in Virginia, according to court filings.

After the Capitol siege, Rhodes called someone with an urgent message for Trump, another group member has said. Rhodes was denied a chance to speak to Trump, but urged the person on the phone to tell the Republican president to call upon militia groups to fight to keep the president in power.

An attorney for Rhodes recently told the committee that their client wants to testify publicly. Rhodes was already interviewed by the committee privately, and it’s unlikely the panel will agree.

The panel also intends to discuss the way many of the Trump supporters who stormed the Capitol on Jan. 6 appeared to be QAnon believers. Federal authorities have explicitly linked at least 38 rioters to the pro-Trump conspiracy theory, according to an Associated Press review of court records.

One of the most recognizable figures from the Jan. 6 attack was a shirtless Arizona man who called himself the “QAnon Shaman,” carried a spear and wore face paint and a Viking hat with fur and horns.

A core belief among QAnon followers is that Trump was secretly fighting a cabal of deep state operatives, prominent Democrats and Hollywood elites who worship Satan and engage in sex trafficking of children.

The panel has shown, over the course of fast-paced hearings and with eyewitness accounts from the former president’s inner circle, how Trump was told “over and over” again, as Vice Chair Liz Cheney, R-Wyo., Said, that he had lost the election and his false claims of voter fraud were just not true. Nevertheless, Trump summoned his supporters to Washington and then sent them to the Capitol in what Chairman Bennie Thompson, D-Miss., Has called an “attempted coup.”

For full coverage of the Jan. 6 hearings, go to https://www.apnews.com/capitol-siege.