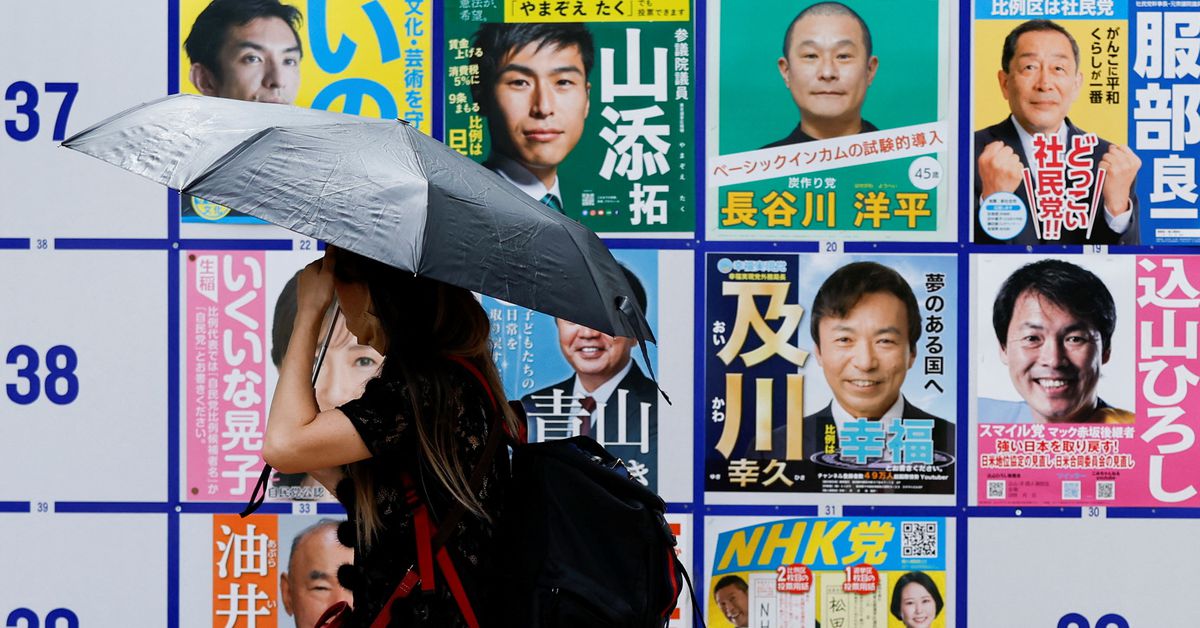 TOKYO, Japan, July 10 (Reuters) – Japan’s conservative coalition government was set to increase its majority in the upper house of parliament in an election on Sunday, two days after the assassination of former Prime Minister Shinzo Abe, a dominant politician and power broker. .

Abe, Japan’s longest-serving modern leader, was gunned down on Friday during a speech in support of a local candidate in the western city of Nara, a killing the political establishment condemned as an attack on democracy itself. read more

Prime Minister Fumio Kishida’s Liberal Democratic Party (LDP), of which Abe was a senior figure, and its junior partner Komeito were on track to win between 69 and 83 of the 125 seats contested in the upper chamber, according to an exit poll by the public. broadcaster NHK.

“Former Prime Minister Abe, who came to support me, was shot in an act of terrorism in the midst of our election campaign,” LDP candidate Kei Sato said after NHK projected he would win his seat in Nara prefecture. Abe was stumping for Sato when he was shot.

“But we continued our campaign in the belief that we must not cave into terrorism or fear it – we must overcome it,” he said.

The LDP was projected to win 59 to 69 of the upper house seats contested, according to the exit poll, up from the 55 it held previously. Reaching 69 seats would give the LDP a majority on its own, a threshold considered a stretch before Abe’s killing.

Official results are expected on Monday.

Elections for parliament’s less powerful upper house are typically a referendum on the sitting government. Change of government was not at stake, as that is determined by the lower house.

Candidates’ posters for the Upper House election are displayed outside a polling station in Tokyo, Japan July 10, 2022. REUTERS / Issei Kato

The strong showing at the polls could help Kishida, an Abe protege, consolidate his rule, giving the former banker from Hiroshima a chance to carry out his goal of boosting military spending. It might allow him to revise Japan’s pacifist constitution, a dream Abe never achieved.

Kishida may move cautiously on constitutional change, but the apparent victory looked set to pave the way for more defense spending, a key LDP election promise, said Robert Ward of the International Institute of Strategic Studies.

Kishida “now has a green light for this”, Ward said.

Security has ramped up since Friday when Abe was shot at close range by a man with a homemade gun outside a Nara train station.

Nara police said on Sunday they had seized a motorcycle and a vehicle belonging to the murder suspect, 41-year-old Tetsuya Yamagami.

The suspect told police he spent months planning the attack, accusing the former prime minister of links to a religious group he blames for his mother’s financial ruin, according to Japanese media. read more

Police said the suspect told them he arrived at a station near the scene more than an hour before the attack and passed time by visiting shopping complexes.