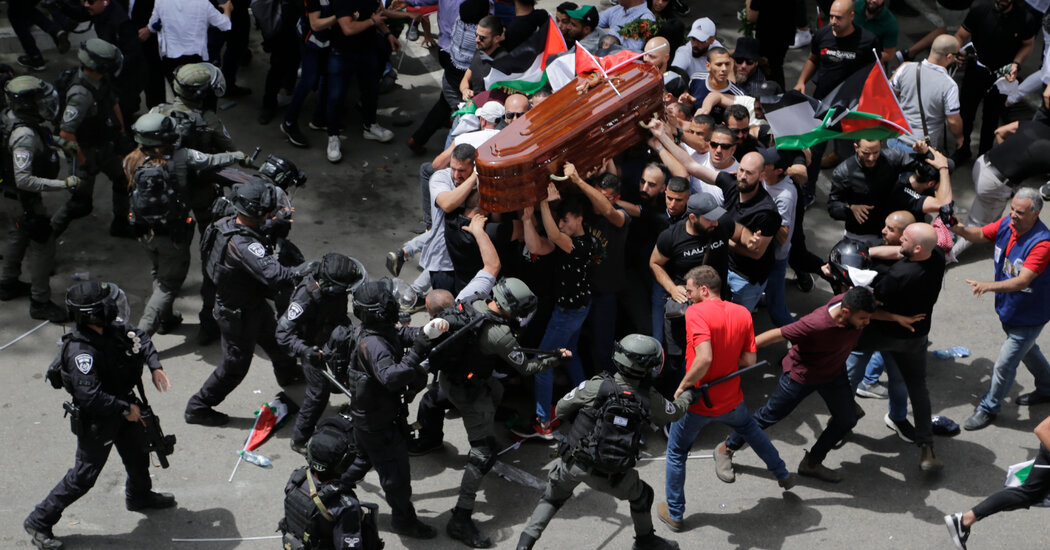 JERUSALEM – Israeli police officers on Friday assaulted mourners at the funeral procession of a prominent Palestinian American journalist killed this week in the occupied West Bank, forcing pallbearers to nearly drop the coffin.

Video showed Police officers in Jerusalem beating and kicking pallbearers carrying the coffin that contained the body of the journalist, Shireen Abu Akleh, striking other mourners with batons, and forcing one man to the ground. During the commotion, the pallbearers were pushed backward, causing them to briefly lose control of one end of the coffin.

The incident happened outside a hospital in East Jerusalem, where mourners had gathered to take the coffin of Ms. Abu Akleh, who was a Christian, to a nearby church for her funeral.

It was one of several spasms of tension during a fraught afternoon, as riot police in several locations in East Jerusalem faced off against crowds of mourners waving Palestinian flags and chanting Palestinian slogans. Israel considers East Jerusalem part of its capital, but it is predominantly populated by Palestinians, and much of the international community considers it occupied territory.

The incident at the funeral procession lasted for roughly a minute, and followed a tense standoff between riot police and mourners in which at least one empty plastic bottle was thrown in the direction of the police.

In a statement, the Israeli police said they “took enforcement action” after some mourners began chanting “nationalist incitement” and after officers had given the crowd a warning. As the coffin was carried out of the hospital, police said, they were “forced to act” because “rioters began throwing stones towards the policemen.”

The police later distributed video showing an empty plastic bottle and two other bottle-shaped objects being thrown in the direction of the officers in the moments before they advanced on the pallbearers, and separate undated video showing several stones on the ground. There was no clear indication of when or how the stones had reached that spot.

Ms. Abu Akleh was shot dead on Wednesday morning in the occupied West Bank during an Israeli raid on the city of Jenin. Witnesses said she was killed by an Israeli soldier.

The Israeli Army said on Friday that while it was possible Ms. Abu Akleh was mistakenly killed by Israeli fire, its initial investigation suggested that she might also have been hit by a Palestinian gunman.

At one point during the funeral a man holding up a wreath stood between the pallbearers and police. Later, as the black hearse carrying her coffin began to slowly make its way through the crowd, an Israeli police officer ripped three Palestinian flags off the vehicle and threw them to the ground, the video showed.

Church bells throughout the Old City rang out as mourners chanted, “With our souls, with our blood, we sacrifice for you, Shireen.”

A spokesman for Prime Minister Naftali Bennett of Israel declined to comment, as did a spokesman for the Israeli public security minister, Omer Bar Lev, who oversees the police.

The funeral was attended by thousands of people and came a day after a state memorial service was held in the West Bank city of Ramallah. Mourners stood in the courtyard of the Palestinian Authority’s presidential headquarters to eulogize and bid farewell to a person considered by many Palestinians to be a trailblazing journalist.

The Palestinian president, Mahmoud Abbas, awarded her the Star of Jerusalem, also known as the Quds Star. One of the highest honors the Palestinian president can bestow, it is traditionally awarded to ministers, ambassadors and members of Parliament. Mr. Abbas described Ms. Abu Akleh as a “martyr for truth and for the free word.”

She was later taken to be buried in Mount Zion Protestant Cemetery, next to her parents.