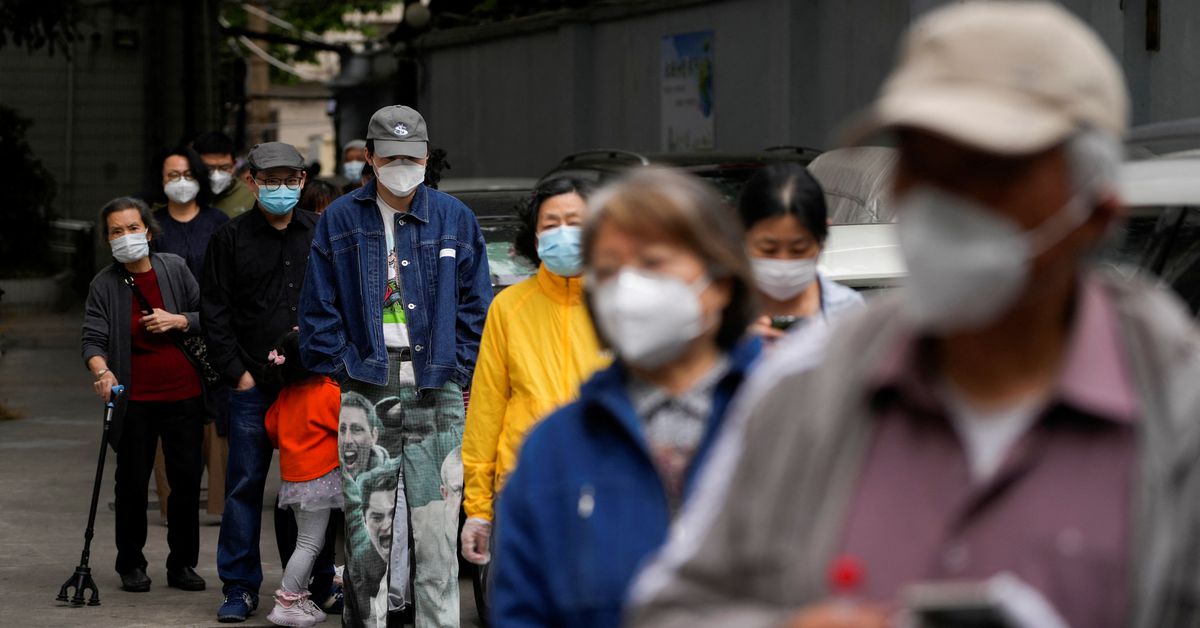 SHANGHAI / BEIJING, May 9 (Reuters) – China’s two largest cities tightened COVID-19 curbs on Monday, fueling public angst and even questions about the legality of its uncompromising battle with the virus that has battered the world’s second largest economy.

In Shanghai, enduring its sixth week of lockdown, authorities have launched a new push to end infections outside quarantine zones by late May, according to people familiar with the matter. read more

While there has been no official announcement, residents in at least four of Shanghai’s 16 districts received notices at the weekend saying they wouldn’t be allowed to leave their homes or receive deliveries, prompting a scramble to stock up on food.

Some of these people had previously been allowed to move around their residential compounds.

“Go home!” A woman shouted through a megaphone at residents mingling below an apartment block impacted by the new restrictions on Sunday, a scene that might baffle other areas of the world that have opted to open up and live with the virus.

“It was like a prison,” said Coco Wang, a Shanghai resident living under the new restrictions. “We are not afraid of the virus. We are afraid of this policy.”

Meanwhile, in the most severe restrictions imposed in Beijing so far, an area in the southwest of the capital on Monday forbade residents from leaving their neighborhoods and ordered all activities not related to virus prevention to halt.

In other virus-hit districts of Beijing, residents have been told to work from home, some restaurants and public transport have closed, and additional roads, compounds and parks were sealed off on Monday.

The restrictions have taken a heavy toll on China’s economy.

China’s export growth slowed to its weakest in almost two years, data on Monday showed, as the central bank pledged to step up support for the slowing economy. read more

The sluggish data drove China’s yuan currency to a near 19-month low against the US dollar.

In a stark sign of the stresses for business, China’s auto association estimated that sales last month dropped a staggering 48% year-on-year as COVID restrictions shut factories and crimped domestic demand.

The curbs have also fueled rare expressions of public anger, further inflamed by recent online accounts of Shanghai authorities forcing neighbors of COVID-positive cases into centralized quarantine and demanding that they hand over the keys to their homes to be disinfected.

One video showed police picking a lock after a resident refused to open a door.

Residents line up for nucleic acid tests during lockdown, amid the coronavirus disease (COVID-19) pandemic, in Shanghai, China, May 9, 2022. REUTERS / Aly Song

In another, a voice recording of a call circulated on the internet of a woman arguing with officials demanding to spray disinfectant in her home even though she had tested negative. Reuters was not able to independently verify the videos.

Professor Tong Zhiwei, who teaches law at the East China University of Political Science and Law, wrote in an essay widely circulated on social media on Sunday that such acts were illegal and should stop.

Liu Dali, a lawyer from one of China’s largest law firms, wrote a similar letter to authorities.

Copies of both letters have been censored from the Chinese internet. Posts from Tong’s social media account on the Weibo site were blocked late on Sunday.

Liu and Tong did not respond to requests for comment.

China is adamant that it will stick to its zero-COVID policy to fight a disease that first emerged in the city of Wuhan in late 2019, warning against criticism of a policy they say is saving lives.

They point to much higher death tolls in other countries that have eased restrictions, or scrapped them altogether, in a bid to “live with COVID” even though infections are spreading.

Beijing has been hoping to avoid the lockdowns of weeks that Shanghai has endured but the growing number of residential buildings under lockdown orders is unnerving residents.

“I’ve already been working from home but I’m worried I might run out of daily supplies,” said a 28-year-old resident of Changping district in north Beijing surnamed Wang after being barred from leaving her compound on Monday.

In response to Reuters questions on the latest restrictions in Shanghai, the municipal government there said it “must insist on regulating the flow and control of the movement of people” and that each district was allowed to tighten measures according to its own situation.

On Monday, Shanghai reported a drop in new cases for the 10th straight day.

But the drop has not eased tensions on the ground.

One video widely shared online showed a group of Shanghai residents confronting police officers and security personnel over whether their hardline measures were legal.

“Not once have I heard that if one compound or one block or residential building has a single confirmed case, then hardline measures of locking up people like criminals are needed,” a resident said in the recording.

Reuters could not immediately verify the video, which was later deleted from the social media site WeChat.