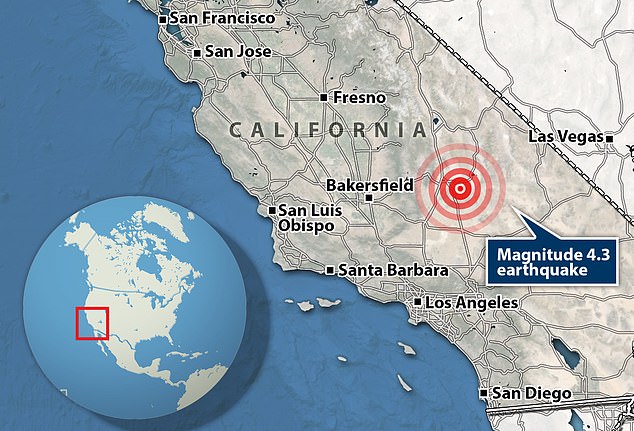 Magnitude 4.3 earthquake rocks Los Angeles as ‘significant’ tremor is felt across the city

By Chris Pleasance for MailOnline

An earthquake of magnitude 4.3 rocked Los Angeles today, with the powerful tremor felt across the city.

The quake struck near the town of Trona, around 120 miles north of LA, shortly after 2.20am on Thursday, according to United States Geological Survey data.

The tremor was felt throughout the downtown area and was strong enough to activate the state’s alert system, which detects ‘significant’ quakes.

The closest city to Thursday’s quake was Ridgecrest, located 14 miles to the west, though there were no immediate reports of damage.

An average of 25 earthquakes with magnitudes between 4.0 and 5.0 occur per year in California and Nevada, according to a recent three year data sample.

Magnitude is a measurement of the distance a fault moved during a quake and the force that would be required to move it.

The scale is typically preferred today over the older Richter Scale, because it is better at measuring both very small and very large quakes.

Most earthquakes that occur measure 2.5 or less on the magnitude scale, meaning they are unlikely to be felt but can be picked up on scientific instruments.

Those measuring between 2.5 and 5.5 – such as Thursday’s quake – are likely to be felt and may cause damage.

Scientists believe around half a million such quakes happen worldwide every year.

The most-damaging quakes are those that measure eight or above on the scale, such as the Tōhoku earthquake which hit Japan in 2011 at magnitude nine.

That quake was powerful enough to trigger a tsunami that washed ashore and killed more than 20,000 people.

It also caused a meltdown at the Fukushima nuclear power plant – sparking an evacuation, with the area deserted to this day.