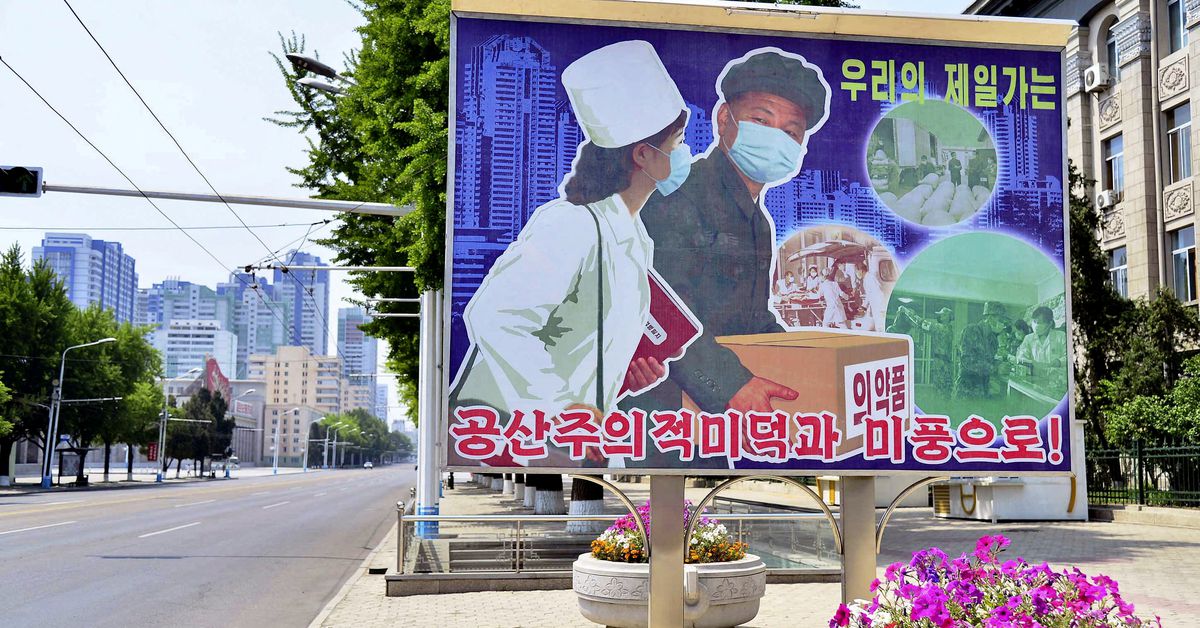 A sign depicting a scene of medical products transportation is displayed at the empty street, amid growing fears over the spread of coronavirus disease (COVID-19), in Pyongyang, North Korea, in this photo released by Kyodo on May 23, 2022. Kyodo via REUTERS

SEOUL, June 16 (Reuters) – North Korea reported an outbreak of an unidentified intestinal epidemic in a farming region on Thursday, putting further strain on the isolated country as it battles chronic food shortages and an unprecedented wave of COVID-19 infections.

The term enteric refers to the gastrointestinal tract.

“(Kim) stressed the need to contain the epidemic at the earliest date possible by taking a well-knit measure to quarantine the suspected cases to thoroughly curb its spread, confirming cases through epidemiological examination and scientific tests,” KCNA said.

The reported outbreak comes as the North tackles its first outbreak of COVID-19 infections. It declared a state of emergency last month, amid concerns over a lack of vaccines and medical supplies.

South Korea’s spy agency previously told lawmakers that waterborne diseases, such as typhoid, were already widespread in the country before it announced the coronavirus outbreak.

“Intestinal diseases such as typhoid and shigellosis are not particularly new in North Korea but what’s troubling is that it comes at a time when the country is already struggling from COVID-19,” said Professor Shin Young-jeon at Hanyang University’s College of Medicine. Seoul.

South Korea is willing to cooperate with the North to tackle the disease outbreak, but Pyongyang remains unresponsive to any offers for dialogue, including Seoul’s earlier proposal to provide COVID vaccines, said an official at South Korea’s unification ministry handling inter-Korean affairs, who declined. to be named.

While the possibility of the unspecified disease spreading through crops appear rather low, the key will be disinfecting water supply sources as it’s likely to be waterborne, said Eom Joong-sik, an infectious disease expert at Gachon University Gil Medical Center.

Pyongyang has been daily announcing the number of fever patients without specifying them as COVID patients, apparently due to a lack of testing kits. Experts also suspect underreporting in the figures released through government-controlled media.

North Korea reported 26,010 more people with fever symptoms on Thursday, with the total number of fever patients recorded across the country since late April nearing 4.56 million. The death toll linked to the outbreak is at 73.

The North has said the COVID wave has shown signs of subsiding, but the World Health Organization cast doubts on Pyongyang’s claims earlier this month, saying it believes the situation is getting worse. read more