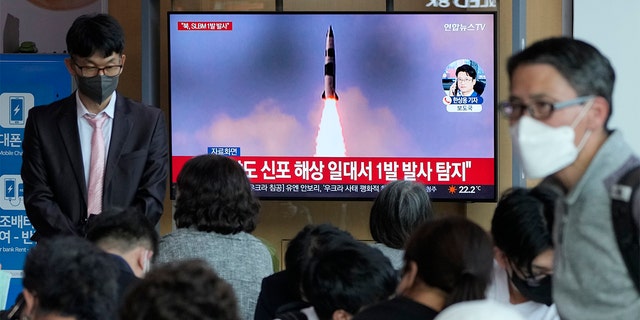 The reported provocation comes as President Biden is preparing to visit South Korea and Japan late next week, where he will “discuss opportunities to deepen our vital security relationships” the White House says.

South Korea’s Joint Chiefs of Staff said in a brief statement that the missiles flew toward North Korea’s eastern waters. It gave no further details.

People watch a TV showing a file image of North Korea’s missile launch during a news program at the Seoul Railway Station in Seoul, South Korea, on Saturday, May 7.
(AP Photo / Ahn Young-joon)

Japanese Prime Minister Fumio Kishida instructed officials to do their utmost to analyze the launch, ensure safety of aircraft and vessels in the area and take precaution and readiness for any possible emergencies, according to his office.

Thursday’s launch was North Korea’s 16th round of tests this year. They have included the North’s first test of an intercontinental ballistic missile since 2017, and there are also signs that the North is preparing to conduct its first nuclear test in five years at a remote testing ground in its northeast, according to the Associated Press.

North Korea has test-launched a spate of missiles this year in an apparent attempt to put pressure on its rivals amid stalled nuclear diplomacy.

his photo distributed by the North Korean government shows what it says is a test-fire of a Hwasong-17 intercontinental ballistic missile (ICBM), at an undisclosed location in North Korea on March 24.
(Korean Central News Agency / Korea News Service via AP)

But some experts say that despite the elevated anti-virus measures, North Korea will likely continue its weapons tests to try to strengthen national unity.

The Associated Press contributed to this report.