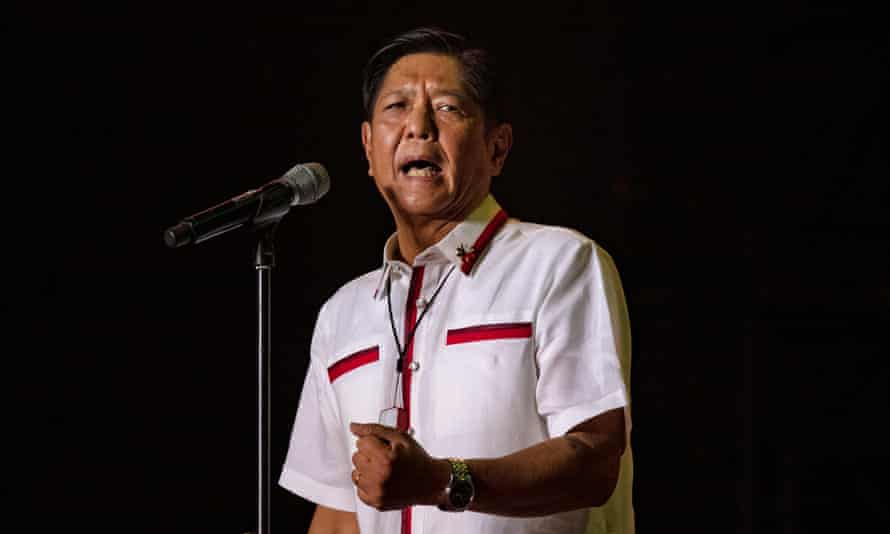 Polls opened in the Philippines on Monday as the country decides its next president in a polarising race between frontrunner Ferdinand Marcos Jr, the son of the late dictator, and a human rights lawyer who has vowed to tackle old, rotten politics.

Opinion surveys suggest Marcos Jr, known as Bongbong, is poised to win the election, despite his family’s notorious history of human rights abuses and corruption. The Marcoses plundered as much as 10bn from the state, while thousands of his opponents were arrested, tortured and killed.

Analysts say the Marcoses and their supporters have harnessed the power of social media to rebrand the family name and spread disinformation that downplays or denies past atrocities. False claims have been spread widely online, portraying Marcos Sr’s rule as a golden age of prosperity and peace. Marcos Jr denies any coordinated online network.

Marcos Jr has not apologized for his family’s political history, and instead praised his father as a “political genius”, and his mother, Imelda, as the dynasty’s “supreme politician” during a recent interview. Imelda Marcos, infamous for her collection of 3,000 pairs of shoes, is appealing against a 2018 criminal conviction on seven graft charges.

Marcos Jr, whose slogan is “together we shall rise again”, has campaigned with a message of unity and rekindling a former greatness.

He is running tandem with the daughter of populist president Rodrigo Duterte, Sara, who is vying for the vice-presidency, an arrangement that has further boosted the Marcos camp.

President Duterte remains popular as he nears the end of his six-year term limit, despite attracting condemnation from rights groups over his bloody so-called “war on drugs”. He has not endorsed a presidential candidate.

Opinion surveys suggest Marcos is far ahead of his opponents. One recent poll found he was the preferred candidate of 56% of respondents.

Marcos’ biggest threat is Leni Robredo, the current vice-president and a former pro bono human rights lawyer, who has promised good and competent governance. As vice-president – a position elected separately from the president – she has frequently clashed with president Rodrigo Duterte, and has condemned his “war on drugs”, which has killed as many as 30,000 people according to some estimates, and prompted an investigation by the international criminal court.

Robredo’s campaign has gathered momentum in the run-up to the election, with large crowds attending her rallies and almost 2 million people, many of them young voters, volunteering to go door to door to win support for her campaign.

About 67 million people are eligible to vote, with polling stations opening from 6am on Monday for a longer period of 13 hours to ensure social distancing.

Vote counting will begin as soon as the ballots close, and in the past the winner has become apparent within hours. However, some analysts say Covid measures may slow down the process this year, and have speculated that the race could be tighter than polling suggests, pointing to the large turnouts at Robredo’s rallies.

The Philippine police and military said on Sunday they were on high alert ahead of the vote, with the armed forces chief, Lt Gen Andres Centino, stating they were committed to ensuring “secure, accurate, free and fair elections”.

The winner will take office on 30 June and lead for a single, six-year term.