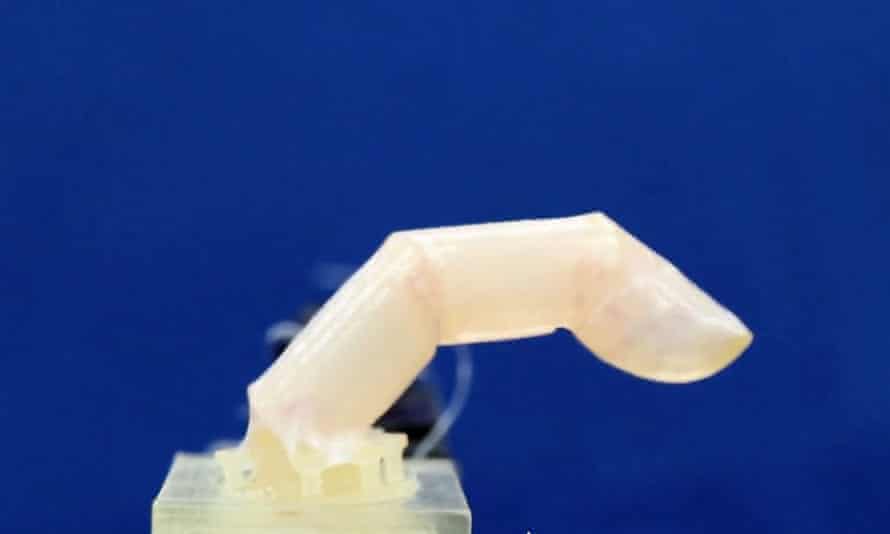 The finger, which was shown to be able to heal itself, is seen as an impressive technical feature that blurs the line between living flesh and machine. But scientists were divided on whether people would warm up to its lifelike anatomy or find it creepy.

“We are surprised by how well the skin tissue conforms to the robot’s surface,” said Shoji Takeuchi, a professor at the University of Tokyo who led the work. “But this work is just the first step towards creating robots covered with living skin.”

The team argues that more lifelike humanoids would be able to interact with people more naturally in a range of roles, including in nursing care and the service industry.

“I think living skin is the ultimate solution to give robots the look and touch of living creatures since it is exactly the same material that covers animal bodies,” Takeuchi said. He added that such advances had the potential to “build a new relationship between humans and robots”.

Scientists have previously produced skin grafts – sheets of skin that can be stitched together in reconstructive surgery, for instance – but have struggled to create living skin on three-dimensional, dynamic objects.

In the latest work, the team first submerged the robotic finger in a cylinder filled with a solution of collagen and human dermal fibroblasts, the two main components that make up the skin’s connective tissues. These coated the surface like a paint primer, providing a seamless layer for the next coat of cells – human epidermal keratinocytes – to stick to. Bending the finger back and forth caused natural-looking wrinkles to develop on the knuckles and when wounded, the crafted skin could self-heal like humans’ with the help of a collagen bandage and, according to the scientists, feels like normal skin.

The finger is a work in progress: its skin is much weaker than natural skin and has to be kept moist as without a circulatory system the cells would die if they dried out. Its movements are also distinctly mechanical.

“The finger looks slightly sweaty straight out of the culture medium,” said Takeuchi. “Since the finger is driven by an electric motor, it is also interesting to hear the clicking sounds of the motor in harmony with a finger that looks just like a real one.”

However, experts say that it is this combination of very lifelike and mechanical that can trigger a sense of revulsion, known as the “uncanny valley” effect.

Dr Burcu Ürgen, of Bilkent University in Ankara, Turkey, said: “It is possible that the human-like appearance [of some robots] Induces certain expectations but when they do not meet those expectations, they are found eerie or creepy. “

Prof Fabian Grabenhorst, a neuroscientist at the University of Oxford who also studies the so-called uncanny valley effect, said: “It seems like a fantastic technological innovation.”

He agreed that people might have an initial negative reaction to the mixture of human and robot features, but said research showed this response could shift depending on interactions with a robot. “Initially people might find it weird, but through positive experiences that might help people overcome these feelings.”

The team now plans to incorporate more sophisticated functional structures within the skin, such as sensory neurons, hair follicles, nails and sweat glands. They are also working on a skin-covered robotic face. The advance is described in the journal Matter.