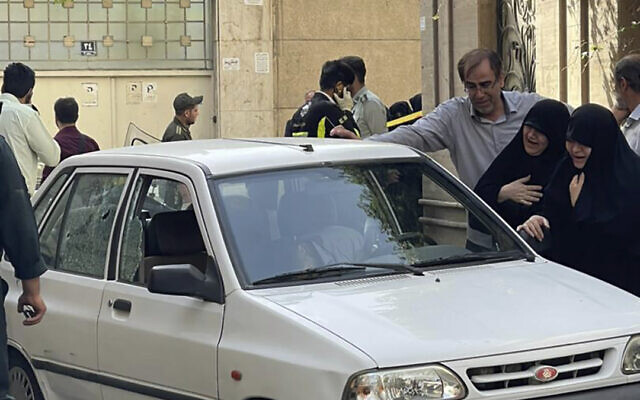 The Iranian Revolutionary Guards colonel who was shot dead in Tehran on Sunday was behind a series of attacks on Israeli envoys in several countries in 2012, according to a report in the Iranian opposition media outlet Iran International.

According to the report, Colonel Hassan Sayyad Khodayari, who was assassinated in the heart of Tehran, was responsible for a 2012 car bomb targeting an Israeli diplomat in New Delhi, which injured the envoy’s wife. Khodayari was also reportedly behind a series of botched bombings a day later in Thailand aimed at killing Israeli envoys.

Tehran has vowed to avenge the assassination, but stopped short of directly blaming Israel. Unsourced Hebrew media reports claim that intelligence shows that only a foreign body could have carried out such a brazen attack on Khodayari.

The assailants behind his killing are still at large, despite Tehran’s claims to the contrary, Israel’s Channel 13 news reported Monday night.

Iranian authorities have yet to pin down the suspects, even though the incident took place in the heart of one of the most secure areas in Tehran – on Mohahedin-e Eslam Street, which is home to other senior officials in the IRGC and its elite Quds. Force.

Iran has focused its attention on spreading fake news reports about the investigation to divert attention away from its failure to catch the perpetrators, the network claimed, without citing a source.

Khodayari was killed outside his home by unidentified gunmen who fled via motorbike. The two assailants shot Khodayari five times in his car.

Iran has not officially blamed Israel for the incident, as it was quick to do after previous assassinations of high-profile officials. Although the IRGC gave only scant detail about the attack that occurred in broad daylight, the group blamed the killing on “global arrogance” – typically code for the United States and Israel.

There have been no claims of responsibility.

Israel, which has made no official comments on the killing, has reportedly raised the security alert level at its embassies and consulates around the world, fearing a retaliatory Iranian attack. The unsourced Channel 13 report also cited fears that Jewish targets might be attacked overseas, and said Israel is also on alert for the possibility of some kind of response from across the northern border.

Khodayari’s assassination was the most high-profile killing inside Iran since the November 2020 murder of top nuclear scientist Mohsen Fakhrizadeh.

Family members of Col. Hassan Sayyad Khodayari weep over his body at his car after he was shot by two assailants in Tehran, Iran, May 22, 2022. (Islamic Republic News Agency, IRNA via AP)

Unsourced Hebrew media reports have claimed that intelligence suggests that only a foreign body could have carried out such a brazen attack on Khodayari.

Iranian President Ebrahim Raisi on Monday vowed revenge over Khodayari’s assassination, insisting “on the serious pursuit [of the killers] by security officials. “

According to Channel 13, Khodayari was himself the person in Iran responsible for carrying out retaliation operations abroad.

Reports in Hebrew and Iranian media said he had planned kidnappings and other attempts to attack Israeli and Jewish targets worldwide and was in charge of recruiting drug dealers and other criminal entities to carry out the attacks.

According to the Iran International report, Khodayari was responsible for a 2012 car bomb targeting an Israeli diplomat in New Delhi, which injured the envoy’s wife, and a series of botched bombings a day later in Thailand aimed at killing Israeli envoys. Hebrew media on Sunday said he had planned kidnappings and other attempts to attack Israeli and Jewish targets worldwide.

He was also involved in attempted assassinations and kidnappings against Israelis in Turkey, Kenya, Colombia, and Cyprus, according to Channel 13.

Khodayari’s funeral is set to take place in Tehran on Tuesday.

Iranian media has identified him as a “defender of the sanctuary” – a reference to Iranians who carry out Tehran’s operations in Syria and Iraq within the Guard’s elite Quds Force that oversees operations abroad.

Little information was publicly available about Khodayari, as IRGC’s Quds officers tend to be shadowy figures carrying out secretive military missions supporting Hezbollah, the Lebanese terror group and political party, and other militias in Syria, Iraq and elsewhere.

The car that was carrying Tal Yehoshua Koren burns outside the Israeli embassy in New Delhi, February 2012. (Joji Philip Thomas, via Twitter)

The IRGC was designated a Foreign Terrorist Organization by former US President Donald Trump’s administration after it withdrew from the 2015 nuclear agreement officially known as the Joint Comprehensive Plan of Action.

The elite military unit has been discussed extensively in recent months after Tehran demanded that the group be removed from a US terror blacklist as a condition for returning to compliance with the 2015 multilateral nuclear agreement.

The US has indicated on several occasions that it does not intend to comply with Tehran’s demand, which has left talks in Vienna frozen since mid-March.