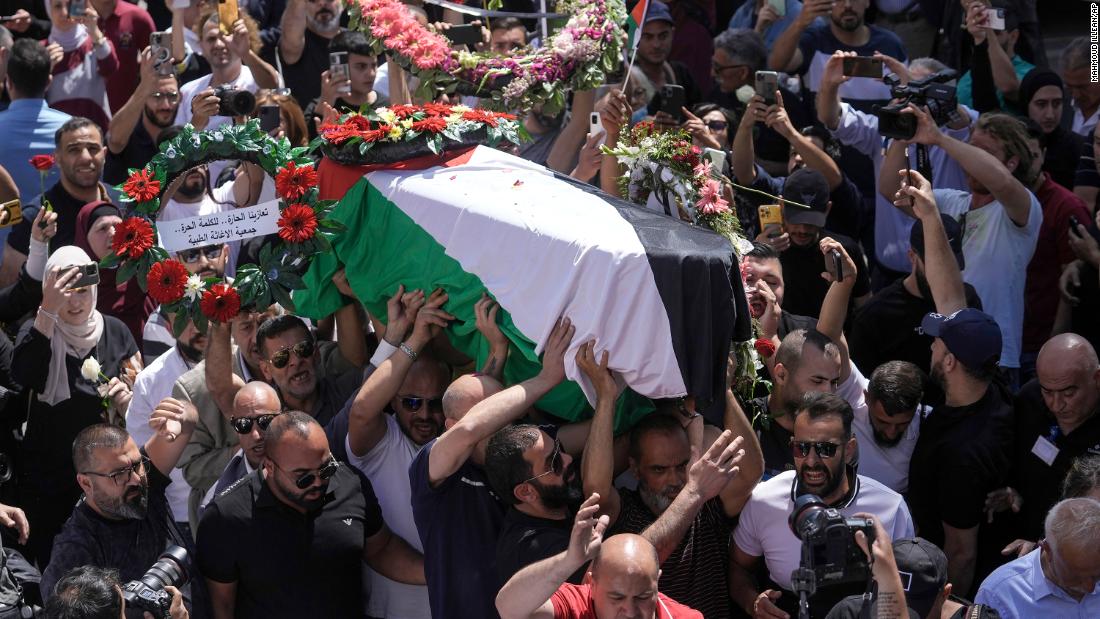 Journalists, diplomats, religious leaders, and officials including Arab members of Israel’s parliament, the Knesset, attended the memorial procession at the Palestinian Authority President’s residence, which saw Abu Akleh’s Palestinian-flag-draped coffin carried in as honor guards played musical instruments. Crowds that had gathered on the streets outside the residence were heard chanting “the honest voice never dies” and “we sacrifice our blood and spirit for you, Shireen.”

The memorial was attended by Palestinian Authority President Mahmoud Abbas, who in a speech at the event rejected Israel’s offer for a joint investigation into Abu Akleh’s killing and vowed to take the case to the ICC.

“We rejected, and continue to reject, the joint investigation with the Israeli occupation authorities because they committed the crime and we do not trust them,” said Abbas, standing before Abu Akleh’s coffin. “We will immediately go to the International Criminal Court to track down the killers.”

Palestinian Authority Prime Minister Mohamed Shtayyeh said the government would share findings of the investigation with the United States, Qatar and the ICC, adding that it would be concluded “soon” and would include an autopsy report.

The Palestinian-American was shot dead on Wednesday while reporting on Israeli military raids in the West Bank city of Jenin. Akleh’s producer, Ali Al-Samudi, was also shot and is in stable condition, the Palestinian health ministry said.

Following the procession, Abu Akleh’s body was brought to St. Joseph hospital in East Jerusalem, where journalists and friends stood outside, crying as they embraced one another. A crowd of supporters gathered outside the hospital, holding roses and chanting “God rest your soul, Shireen.”

As the ambulance carrying Abu Akleh drove in, dozens gathered to help carry her coffin into the hospital, draped in roses and the Palestinian flag.

Mourners also laid flowers at the doorstep of Abu Akleh’s house in the Jerusalem neighborhood of Beit Hanina.

“Silencing her will never stop us from resisting and telling our story,” Khwais added.

Al Jazeera has accused Israeli security forces of deliberately targeting and killing Abu Akleh, 51 – one of the Arab world’s most prominent journalists. Her death was met with regional and international outrage and calls for accountability.

The circumstances surrounding her death are unclear. Three eyewitnesses told CNN that the journalists were shot by Israeli troops and that there were no Palestinian militants next to the journalists at the time.

The Israeli Defense Forces (IDF) said its forces came under heavy fire during the counterterrorism operation, and that they returned fire.

IDF International Spokesperson Amnon Shefler told CNN late on Wednesday that the Israelis “just don’t know yet” who killed Abu Akhleh, in what appeared to be a softening of previous statements by Israeli officials that said she was “likely” shot by crossfire from Palestinian militants.

Her employer, Al Jazeera, called her death “a blatant murder” by Israeli forces.

Abu Akleh’s funeral will take place on Friday in the Roman Catholic Church in Bab Al-Khalil, before she is buried in Jerusalem’s Mount Zion Cemetery next to her parents.