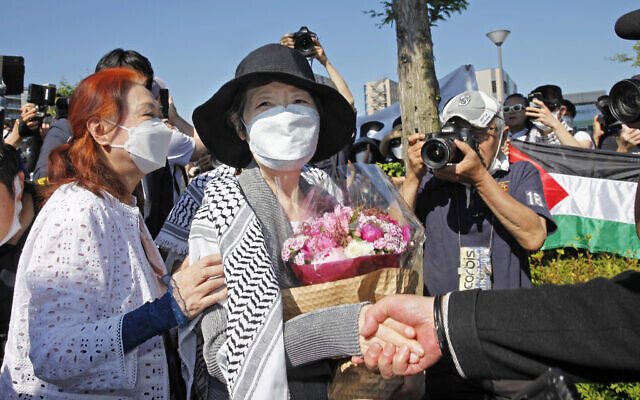 Palestinian terrorists in Beirut on Monday marked the 50th anniversary of a deadly attack carried out by members of the Japanese Red Army at Israel’s Lod airport, alongside the last surviving perpetrator.

Kozo Okamoto, the only remaining member of a three-man terror cell that killed 26 people on May 30, 1972, at the airport near Tel Aviv, made a rare appearance at the ceremony. The two other attackers were shot dead by security forces at the scene.

The short event was held at a cemetery on the edge of Shatila Palestinian refugee camp, where Okamoto, now 74, laid a wreath on a grave honoring his fellow JRA members and flashed a V-sign.

The attack was planned by the Popular Front for the Liberation of Palestine (PFLP), which has commemorated it every year for a half-century. The PFLP is classified as a terror group by Israel, the United States, the European Union, and Japan.

The three members of the Japanese Red Army recruited by the PFLP opened fire and threw grenades at the airport, killing eight Israelis, one Canadian, and 17 US citizens from Puerto Rico, who had flown in on a pilgrimage to the Holy Land.

The bloodbath at what was later named Ben Gurion Airport set off a review of global security standards in the aviation industry.

Fusako Shigenobu, center, who co-founded the terrorist group Japanese Red Army, shakes hands with a supporter after she walked out of prison in Akishima, suburb of Tokyo, May 28, 2022 (Kyodo News via AP)

Fusako Shigenobu, who co-founded the Japanese Red Army, was released from a Tokyo prison Saturday after serving a 20-year sentence.

Okamoto, who was captured during the attack, was sentenced to life in prison in Israel, but released in a huge prisoner exchange deal known as the Jibril Agreement in 1985. Okamoto has since lived under the protection of the PFLP in Beirut.

Kozo Okamoto, the only surviving perpetrator of a massacre of 26 people in a terror attack carried out by members of the Japanese Red Army (JRA) at Israel’s Lod airport in 1972, poses in Beirut on May 30, 2022 with members and supporters of the PFLP Palestinian terror group that planned the attack. (JOSEPH EID / AFP)

He was jailed again in Lebanon in 1997, but narrowly avoided extradition to Japan and in 2000 became the first – and to this day the only – person to obtain political asylum in Lebanon.

“[Okamoto] came to defend the freedom of people who had their lands stolen. He believes in their rights, he believes in justice and human freedom, “said a PFLP official who gave his name as Abu Yusef told AFP.

Japanese terrorist Kozo Okamoto, center, surrounded by guards, listen in a Lod courtroom, as a guilty verdict is delivered, on July 17, 1972, for his part in the May 30 massacre of 28 people in the Lod airport. (AP Photo, File)

An official from the Lebanese Shiite terror group, Abdullah Hamoud, also attended the ceremony in honor of Okamoto, who is still wanted in Japan for terrorism.

“This valiant hero suffered in the enemy’s prisons but today his heart beats with Palestine,” said Hamoud.